Today was pretty tough. Except for breakfast. Breakfast was awesome. I woke up early but didn’t feel like going quite yet, plus I still had to refill my water. I walked down to the river with some Cheerios/powdered milk and a powdered chocolate protein shake. I sat down and hydrated those and then started eating when all of a sudden a whole family of deer decided to have breakfast too. There were two big bucks and several does. They watched me cautiously for a while then started eating and ignoring me while I ate and didn’t ignore them. It was super cool, 10/10 would recommend. Better than eating breakfast with Mickey Mouse at Disneyland, in my opinion.

Anyway, back to the toughness. Looking at my map and the schedule I was supposed to be following, I set out with a goal to make it as close to Tuolumne Meadows as I could, but this was a pretty lofty goal, even for me. It would be about a 17-mile day, on day 2. Something that I was clearly not ready for yet. I only made it to Sunrise camp, which was about 8.5 miles from where I had started in the morning. That said, it is only day 2, I need to stop being so hard on myself and realize that I can make up for it later on, and I will finish in time. Even if I don’t I know I will still have an amazing trip and will make awesome memories and this isn’t something I am going to regret.

Anyway, tomorrow I will technically be going over my first pass. It is Cathedral pass, and it is at 9,703 feet. The highest pass on this trail is Forester, which is at 13,000 something feet. Anyway, I’ll cross those mountains when I come to them.

Today was a very lonely day. Not because I was lonely necessarily but because I only saw 2 people all day! (Until I got to my camp anyway…more on that in a minute). It was pretty surreal hiking in the smoky wilderness with nobody around. I listened to a great e-book and some interesting podcasts, but I didn’t actually talk to anyone all day which, if you know me in person, might be hard to believe!

After some pretty large uphills, the sun was beginning to go down and I started to look for camp. After refilling my water in a stream, but not wanting to drink too much of it in case I needed it for dinner, I saw sunrise camp on my map and started to head in that direction. I assumed it would be similar to Little Yosemite Valley with bear bins, maybe a few day hikers and not much else. Boy was I wrong! As I stumbled into Sunrise Camp, I felt like I was in some kind of dream or mirage. There were large semi-permanent tent structures, bathrooms, and a stable with a herd of donkeys. I walked towards a large tent with a sign that said, “Office”. I walked into quite a strange sight for someone who hadn’t seen people all day.

A small crowd of people sat around a picnic table, playing cards and eating snack foods. There was a small store in the corner and lemonade in the corner with a sign, “free for guests, $1 for hikers”. I struggled to take it all in. A guy who worked there broke into my thoughts, saying

I don’t know why, but for some reason, I just could not wrap my mind around what I was seeing and it took me an embarrassing amount of time to respond to him. I somehow stammered out a question, asking where the backpacker’s campground was, or if there was one around here. He offered me some lemonade and pointed me in the right direction. I mumbled some kind of thank you and headed in the direction he pointed. It was really embarrassing, to say the least, but hey at least I didn’t have to pay the $1 for lemonade! 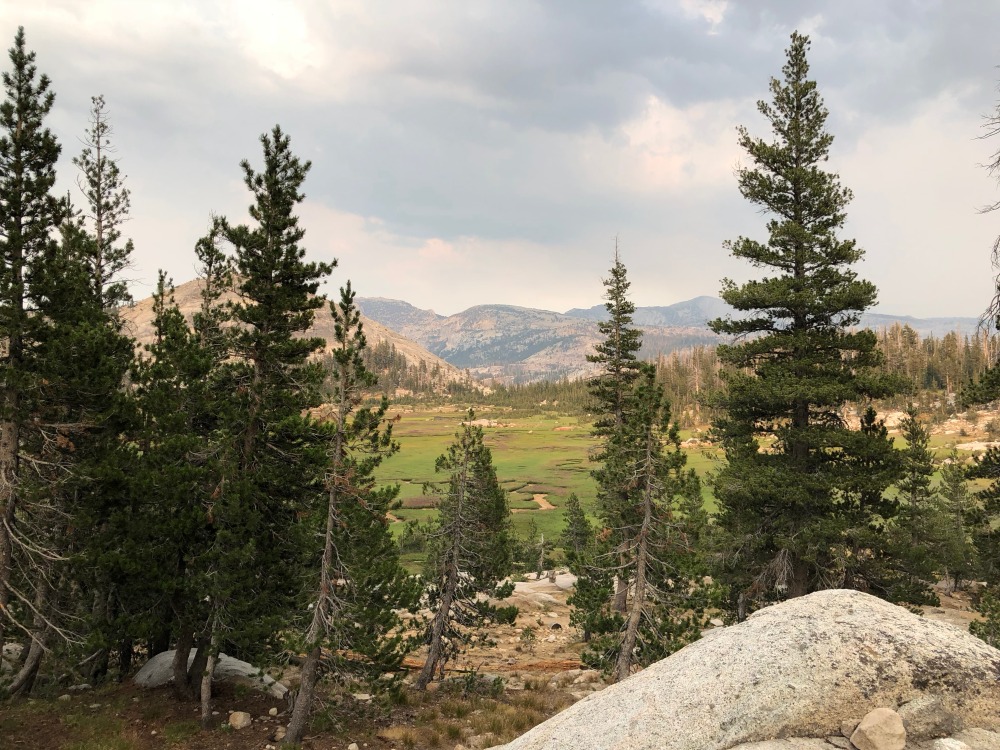 It turns out that Sunrise Camp is a camp where people can pay to have a donkey carry all your stuff for you, while you have an easy little hike in (or maybe you ride the donkeys, I don’t know) then they cook for you, give you free lemonade, maybe even set up your tent for you and who knows what else. I don’t know about you but I like to be in the wilderness when I’m in the wilderness. Plus donkeys smell bad. Not that I can say much about the way I smell but hey, it’s only day two 😉 anyway, I’ll let them live the way they want to live but I personally can’t wait to get away from this ‘civilized’ wilderness and into some real middle-of-nowhere locations. Although a burger would be nice.

I set up camp on a gorgeous ridge above a meadow and took some pictures of the sky which was just beginning to bloom into a beautiful sunset. I smiled at my campsite neighbors, an older man, and a young teenage girl. It looked like a grandpa and a granddaughter. He was busily rummaging around their campsite and she was looking moody and reading a book. I started to make dinner.

Today was the first day that I had a meal that I had not prepared myself. I know it is only the second day but I just couldn’t wait for this one. I had a Harvest Pork Bowl from Bushka’s Kitchen, which is a small San Francisco based company that I discovered shortly before leaving and they pulled out all the stops to make sure I got my food on time before I left. I’ll make a more detailed post about all of the food I ate on the trail later, but believe me when I say that it was ahhh-mazing.

Eating with a beautiful sunset backdrop certainly didn’t hurt either. I was so eager to finish all of the food that I tipped the bag toward me and spilled the last of it down my shirt, IE: the ONLY shirt I had. Certain that my moody teenager neighbor saw me and was laughing at me, I changed into a jacket and went down to the water spigot to clean off my shirt. I used a guyline from the tent and attached it to a tree stump to make a makeshift clothesline and held my shirt up with a paper clip I had picked up off of the trail earlier and got into my tent, hoping it would dry by morning.

I snuggled into my sleeping bag and drowned out the sounds of the braying donkeys with an episode of The Office (in my headphones, of course, didn’t want to disturb the peace) and settled into a nice warm sleep.

Thanks for reading! See you tomorrow!