I woke up early and took my time in the morning so my tent and things that had gotten wet in the rain could dry and my phone and InReach could get all charged up before I got going. The sky was clear with only a few clouds and things were looking up. Several groups of hikers passed me, they seemed to be in a hurry and it was nice to be able to take my time and enjoy my morning. Some people seemed to be in a bad mood. Several hikers didn’t return my “good morning” as they passed and a few older hiker ladies scolded a younger hiker in a leather cowboy hat for not warning them that he was hiking behind them, even though he had said excuse me from a reasonable distance. I brushed off the bad vibes and focused on enjoying my morning.

I started a new podcast that I had been excited to start and got going. I hiked down into a long valley with lots of running water. A few miles in, a girl about my age who was coming up the trail asked me if I had seen a guy with a cowboy hat and asked which direction he was heading. I told her that I had seen him go by a few hours earlier and that he was heading in the same direction as I was. She told me that he was her boyfriend and he had gotten ahead of her and she was worried she had taken a wrong turn since she hadn’t seen him in a while so she had turned around and gone the opposite way.

I hadn’t seen him since he was scolded for doing nothing wrong, but I pulled out my map and showed her where we were and where I had seen him and assured her that this was the only trail and that it would be difficult to go in another direction. She thanked me and decided to continue in the same direction as I was. We talked as we walked. I found out that her name was Ashley and she and her boyfriend Derek were hiking the JMT and that they had come from Montana (I think…) and were really excited to be in California! They were doing a resupply that night at Vermillion Valley Resort, or VVR. She asked me if I was going to be stopping there too and I told her that it wasn’t in my plans.

VVR is a popular spot to stop but it is slightly off trail, about five miles. You can either hike the 5ish miles there, or you can take the ferry across the lake, which costs (at the time of this writing) $13 one way or $23 round trip and takes about 45 minutes. Thru-hikers get their first beer free, and rumor had it that you could do dishes and get free food in exchange for working. At least that was what Hitch, the PCT hiker that I drove to the hostel in Mammoth before my trip, had told me. Those were the pros, and they got me thinking…hmmm…free beer? free real food? a sort of shower by doing dishes? Should I? The cons were 1. I’d spend money, I didn’t really leave room for extras in my budget 2. I’d lose at least a day when I had just gotten back on schedule again 3. My family was sure to worry when they saw my tracking device suddenly go off trail with no explanation. I told Ashley I’d think about it.

We kept going, talking about what she was currently studying in school and what I had studied, our families, past hiking and backpacking trips we had done, and how our trips had been going so far. Eventually we caught up to Derek, who had stopped at a stream to cool off and wait for Ashley and I left them behind, telling them that I might see them at VVR and hoping to be able to make a decision before I came to the point where the trail split for the trail to the ferry landing area. 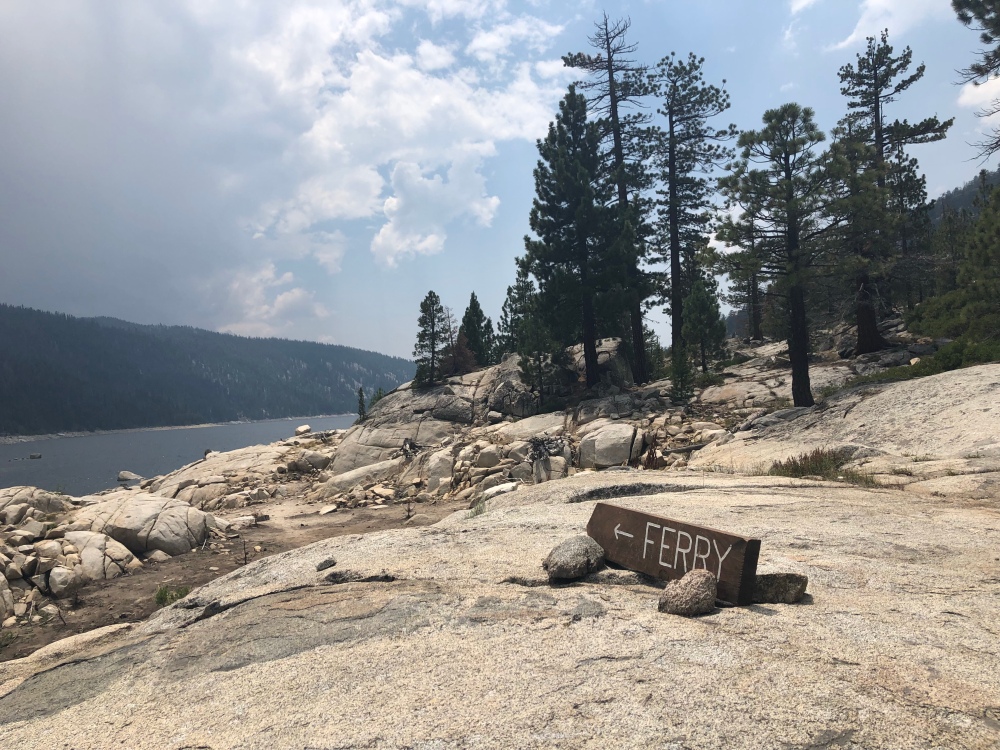 In the end, I decided to go to VVR. I joked about the free beer and possibly food being the reason that I decided to go but really it was because I felt like going there would be good for me and I might finally get the human connections that I had been craving. We waited for the Ferry for a few hours, it only comes twice a day. Besides Ashley and Derek, there were two older guys named Ramiro and Taylor. They had been hiking around the Sierras for the past 30 years, on and off but had never done the whole John Muir Trail so that was what they were doing this trip. They had no tents, only a tarp in case it rained and they didn’t carry bear cans, they just hung their food in bags at night. They also didn’t filter their water and said that they had never gotten sick. I definitely envied how light their packs were, but I also enjoy having some of the comforts that they had forgone.

I talked to Taylor and Ramiro for a while. We talked about politics, education, school, leadership, and backpacking. Soon, other hikers slowly started to straggle in for the Ferry. There were 4 girls from San Diego, and 3 guys from somewhere else. There was another couple and an older guy and his daughter or granddaughter. There were a lot of people that I had passed on the trail but not yet talked to, and it was cool to swap stories and talk about the things we had seen on our trips up until that point.

Eventually the Ferry made its way to us and everyone lined up to board. We had all boarded and the Ferry had waited a few extra minutes and was about to take off when one last hiker came running up to the dock and barely made it. He looked so tired but so happy to not have missed the Ferry.  The ride to VVR was cold and fast. The ferry made the water spray everywhere except the back of the boat, where I was. I got a little bit damp but the people at the front got completely soaked. It felt so surreal to be going faster than my 2-3 mile per hour walking speed. 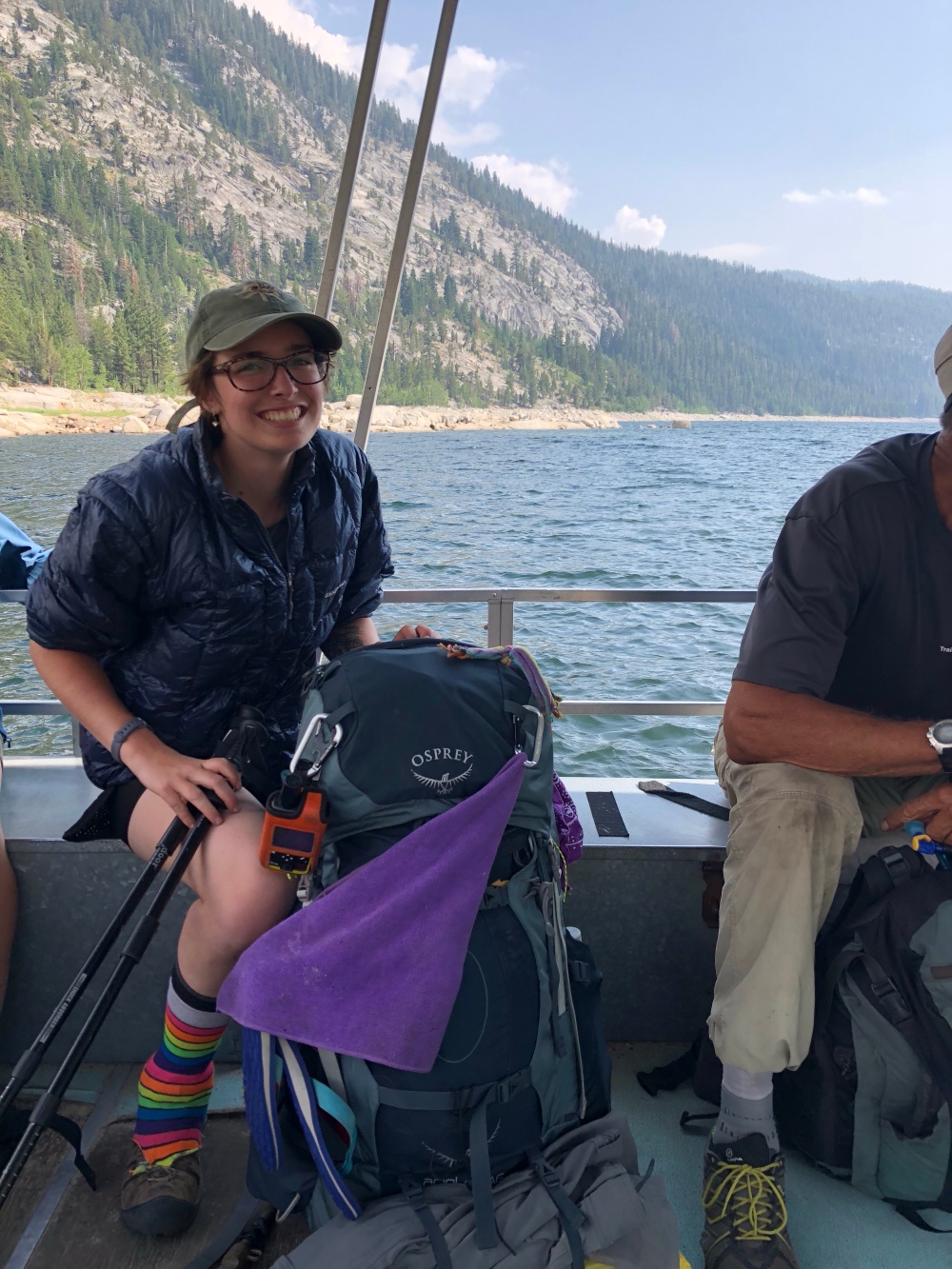 When we got to VVR, we circled around for an introduction and mini-orientation by the staff and then set up a tab with our name on it. I used my trail name, Pepper. I had been using my real name up until this point because I didn’t really feel like I had the right to use my trail name for some reason. Using it here felt right, and I introduced myself that way for the rest of the trip. I finally felt like I belonged to the trail, in a way. I got my free beer and then I asked about working in exchange for food, and the staff pointed me towards the kitchen. I told Ashley and Derek (who I had been hanging out with) that I would be back later and would be washing dishes for free steak (which would have been $26!!) and the guy who was almost late to the ferry was with them. He got excited about free food and almost did dishes with me, but at the last minute decided to hang back with the others.

I  took my post at the dish station and got to work. The kitchen staff told me to do dishes for as long as I felt I had to in order to earn the food. I thought that was a very subjective stopping point, but I was okay with it. It was nice and relaxing to be doing dishes, plus my hands got really clean! I tried to calculate how long I should do the dishes according to CA minimum hourly wage with the price of the steak and tried subtracting for taxes just for fun but soon my mind drifted off to other things, plus I am not great at doing math in my head, and frankly didn’t want to be doing math on my vacation. Before I knew it, a couple hours had passed by and the mountain of dishes was almost gone. The kitchen staff guy poked his head out the window and exclaimed,

Score! My daydreaming dishwashing had gotten me a shower AND a steak. What more could I ask for? Ice Cream? No, that would be too perfect. Eventually I finished up the stack of dishes and went inside for my steak. Let me tell you, that steak was the best thing I have ever eaten, hands down. I sat with Ramiro and Taylor and some of the other guys who had been waiting for the ferry, enjoying the steak that tasted just that much better because of the work that had gone into earning it.

I sent a quick message to my mom on my InReach, letting her know that I was okay and had gotten steak and a beer! I knew she would let the rest of the family (/built-in fanclub) know so that they wouldn’t get worried that I was so far off of the trail and my schedule. I was a little worried about making it back onto my schedule on time, but I knew I could push myself a little bit, it was worth it for what I was experiencing here.

After I had finished my food, I headed out to the back, where Ashley, Derek and a few others had gathered around the fire ring. I introduced myself and met some of the staff members, as well as Chad and Celeste, the other couple who had been at the Ferry, and Justin, the almost late hiker who had barely caught the ferry. He was a solo hiker too, and when I introduced myself and said that I was solo he exclaimed,

We all hung out for a while, going between the dining area and the campfire until they closed the kitchen. Ashley had bought a berry pie a la mode, which she shared with me so I did get my ice cream after all! It was such a fun night, and I stayed up much later than I had been previously, I ended up going to bed well past 10 pm. This was exactly the type of connection I had been hoping for, spending hours laughing and joking around the campfire with the VVR staff and my new friends. Finally. I was so glad I had decided to take this detour. 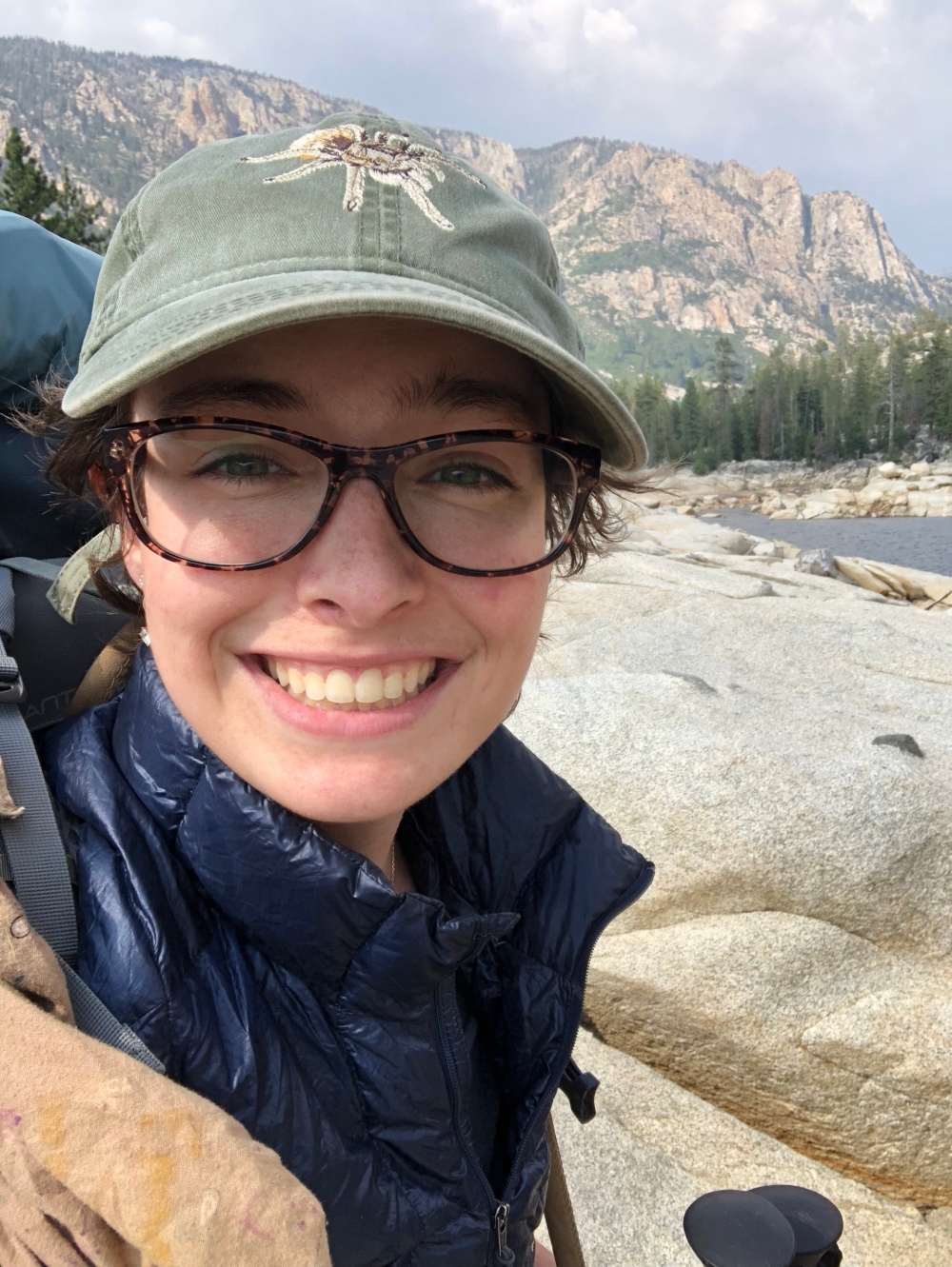 Before we headed to bed, Justin, Chad, Celeste, Ashley, Derek and I had decided to spend the next few days hiking together in a group, until we had to go our seperate ways again because of various resupply plans. I fell asleep excited about the new adventure, and couldn’t wait to see what the days ahead of me had in store! I also couldn’t wait to take a shower in the morning. Suddenly everything around me, including me, smelled even worse.

Note: VVR is at the opposite end of Thomas A Edison Lake, but I only recorded my track until I got on the ferry, I didn’t think the 5 miles across the lake should count unless I was walking, which I wasn’t. 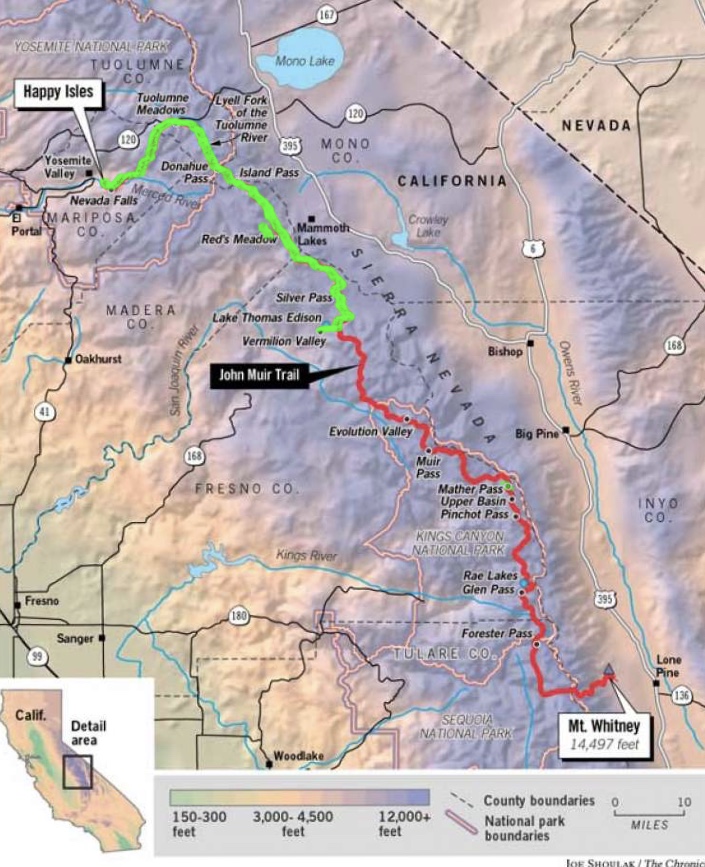