The day started out sort of early, well, for me anyway. I woke up around 6 or 7, and everyone else was still sleeping. I took some time to do some journaling and listen to an eBook that I hadn’t gotten the chance to listen to the past day or two because I was socializing. Eventually, Chad and Celeste woke up and we made some breakfast. Justin (who said he would “probably wake up around 7am”) woke up around 9, stumbling out of his tent and going straight to his bear can for a Butterfinger. Breakfast of champions! Chad, Celeste and I laughed at him while we ‘enjoyed’ yet another bowl of oatmeal in a very long string of bowls of oatmeal.

Once we finished our various food items and got going (after a calisthenics/stretching session led by Justin, which I will put on Instagram), we held a pretty fast pace. We walked along, talking and joking and playing some more trail games thought up by Justin. We had a lot of water crossings, even one shoes-off one! Those are always fun. There was another crossing that was easier with hiking poles, which only Justin and I had. He tossed his poles across the river for Chad to use, then Chad tossed them back (which I caught on video) Thankfully, no poles were lost during this nail-biting experience!

Eventually, we got a little bit separated because we were all hiking at slightly different paces, but we agreed that we would meet up at the top of Selden Pass. Justin had a lot of energy (must have been the extra sleep…or the Butterfinger) and he decided to pretty much RUN up the pass.

No thanks! I hung back and stayed with Chad and Celeste. We stopped for a water break and I refilled my water bladder then put it back in my pack. I hauled my backpack back onto my back when I heard the sound of flowing water…coming from my backpack. In a flash, I took the pack off and saw that my worst fears had been realized. My bladder hose had become disconnected and was leaking water all through my pack!!! I quickly stopped the leak but several things were already soaked, all the way down to my sleeping bag at the bottom of my pack! I decided to “embrace the suck” and continue on. It wasn’t lunchtime yet, and I could always lay my stuff out to dry at lunch, it had been pretty hot during the days anyway. I put my pack back on and continued down the trail.

We made it to the top of Selden Pass and found Justin waiting at the top for us. We decided to have lunch at Heart Lake, just a little ways from where we were. The downhill was kind of rough on my knees, but we made it to the lake in pretty good time. It was so beautiful and we found a secluded spot a ways off the trail and I spread out my stuff to dry. Until this point, I had been having an energy bar and a tuna wrap for lunch most days, but I decided to try the Triple Peanut Slaw from Food For The Sole, a cold soak salad that I was saving for a “good time”. I got a much better time than I had bargained for. 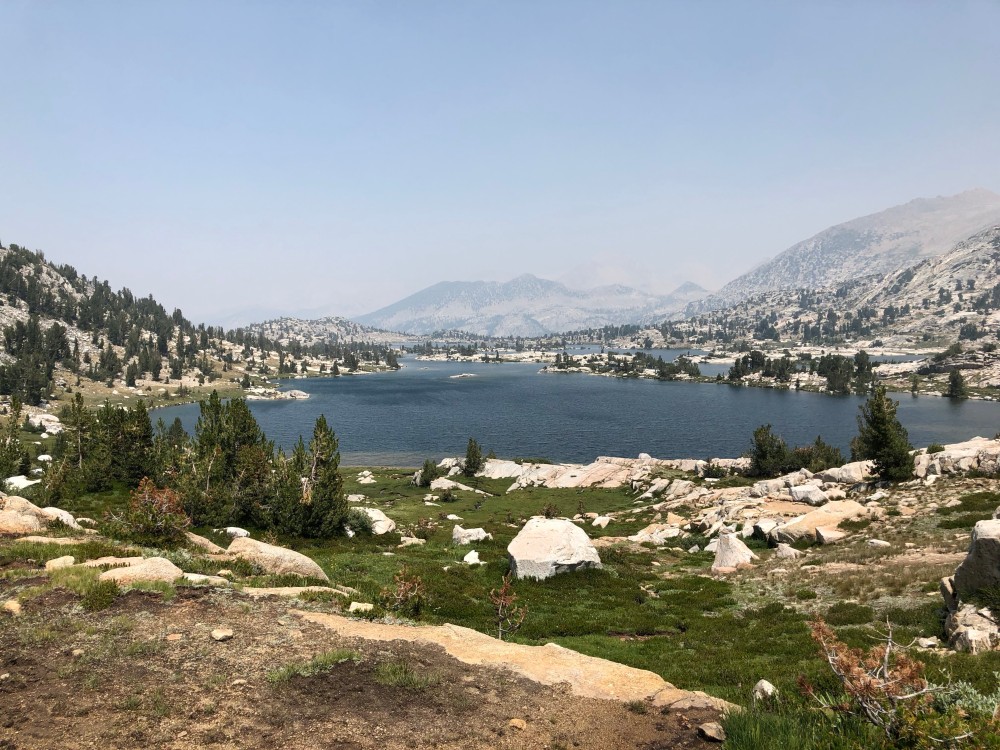 While we were eating, somehow the conversation turned to modeling and Justin told us that he had once modeled the fall collection for Macy’s or JC Penney, or some big box clothes retailer, I forget (/maybe blocked it out of my mind?). He proved this by modeling the package of Triple Peanut Slaw for us and well…hilarity ensued. After we calmed down, and everyone tasted (and approved of) the triple peanut slaw, but nobody else wanted to model it. Chad, and Celeste did some fishing and I took a short nap in the sun and waited for my sleeping bag (and other smaller things) to finish drying.

We had planned on taking a normal time (maybe 45 mins to an hour) for our lunch break, but it was so nice up there in the sun that we ended up taking about 3 hours! It was worth it, and a really great break but we realized that this meant that we would not be making it to Muir Trail Ranch (MTR) that night like we had originally planned. This was okay with everyone, Justin and I were picking up a resupply at MTR but because of the steak and fish tacos we both had extra food, and Chad and Celeste weren’t resupplying until they got to the Onion Valley exit point.

My sleeping bag was dry, and we still wanted to attempt to get near MTR by the time it got dark, so we packed up and continued on. We made our way down the trail together, once again entertained by Justin’s trail games and funny questions, but eventually we got kind of quiet (after discussing what we would name our future children if we had to name them after an animal, and discussing the weirdest name we had ever named a pet – a discussion in which my new friends found out my real name). There was a long, long, downhill switchback that was full of small, mean rocks that stabbed and shifted under our feet.

We had found out from a northbound hiker that MTR closed resupplies at 5pm, we got there around 7. We headed down to the gate anyway, and read the signs that pointed us to the hot springs, as well as the areas where we were allowed to camp. Unfortunately, we had to go down a hill in order to read the sign, and then right back up that same hill to get to the trail to go down another hill to the campsites. I think they could have put a sign at the top of the hill, that way, they’d have less smelly hikers reading their gate info after hours AND the hikers wouldn’t have to go all the way down that hill (712 weary steps, I counted) Win-win. 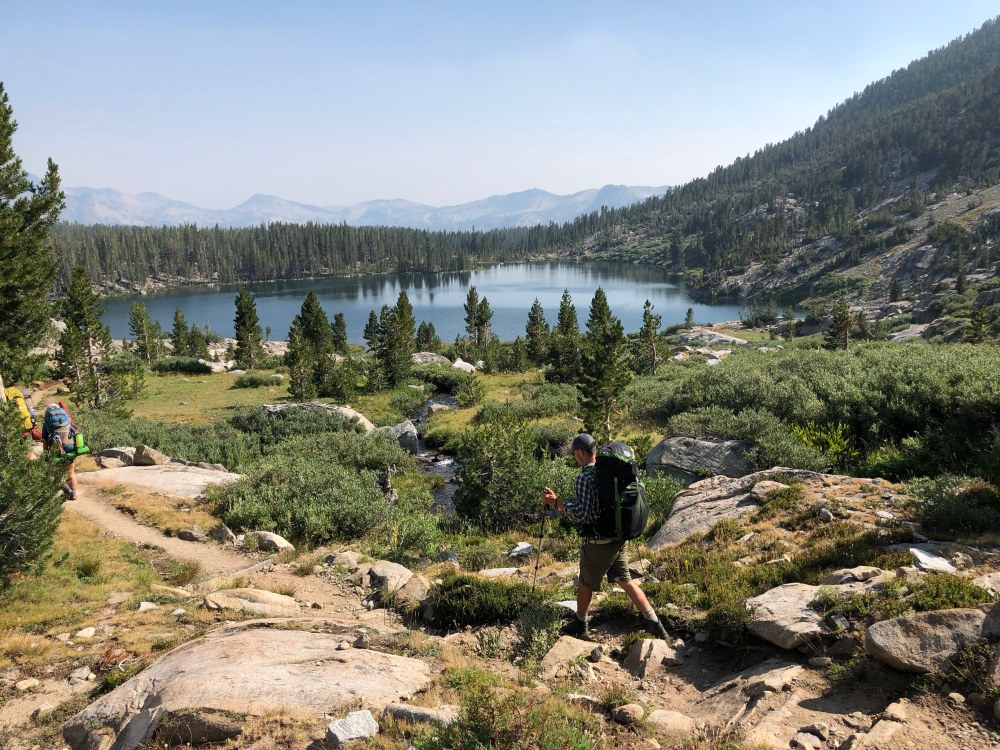 We found a nice campsite nestled pretty far down in the ravine and set up camp. We discussed going to check out the hot springs, but in the end, decided against it. In order to get to the hot spring, we would have had to cross a cold and fast-moving river. There was a rope that someone had tied up to help people get across, but it just didn’t seem worth it, and we were pretty tired.

We made dinner and went to bed with the sun. There were no campfires allowed in this part of the trail, we were too close to the treeline I think. I was secretly glad because it meant that I would be able to get to sleep sooner and I felt like my legs needed extra rest. I journaled a little bit, then watched another episode of The Office and went to bed.