We woke up at 4:30 (well, I hid in my sleeping bag until 4:45, then got up). I like to eat in the morning, so I heated up a quick meal and ate. Ramiro and Taylor apparently only eat an energy bar and then have a more substantial “second breakfast” later on, so they packed up and headed out. They were meeting some friends at the LeConte ranger station later that day, and their friends were bringing them some food. They didn’t know how long their friends would take so they said we would likely see them later on. I finished up my food and then Justin and I packed up our stuff and headed out. (He actually woke up when he said he was going to wake up- a miracle!)

As we left the top of Muir Pass, the sun was just beginning to creep over the hillsides and turned them all a beautiful golden color. I had seen photos like this before, and while the photos are beautiful, it is nothing like being there in person. Truly magical.

We started heading down the other side of the pass, moving quickly in the crisp morning air. There was a small bit of snow on the trail, but just like silver pass, it was not enough to need any aid to walk through, just slow and careful feet.

As the day got longer, the sun came out and it started to get very hot. I wasn’t drinking as much water as I should have been and I started to feel pretty dizzy. I had to sit down and rest for a while, but was soon hydrated and back on the trail when all of a sudden, I stepped weird and rolled my ankle!

I had slightly rolled it a few times before on the trip but this time it HURT. I had to sit down and stretch it out for a lot longer than I was comfortable with, but it also gave me extra time to hydrate and eat a bit of trail mix. I started down the trail again and although my ankle felt a little rough, it was fine to walk on. I was so relieved. Even though I felt okay, I was going pretty slow so I told Justin to go on ahead of me and that I would be fine. I knew I was somewhat taking a risk by letting him go on ahead, but we had seen a lot of hikers that day, and I knew I could handle it.

We met up again later on and hiked together for a while. We were questioning the whereabouts of the famous LeConte rock monster when suddenly, we went around a bend and there it was! We stopped to take our obligatory rock monster photos and then kept going, Justin quickly losing me again with my slower pace. 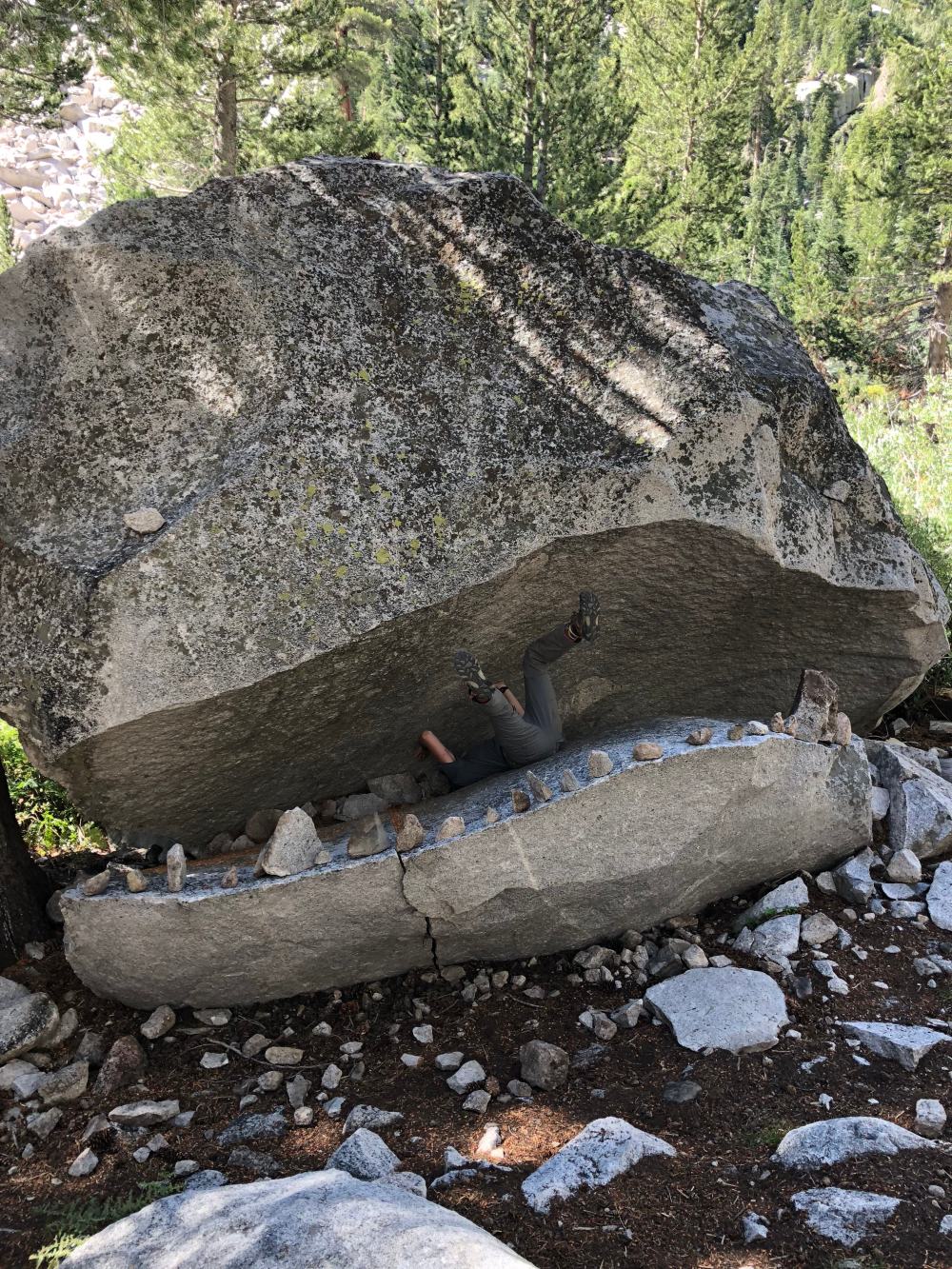 I was okay with this and took the time to enjoy the views and think about the wonderful place I found myself in. It was so amazing to me that the 13 days I had spent out here so far had seemed so long, and so short at the same time, as well as how much and how little happened each and every day, simultaneously. I soon came upon the LeConte Ranger Station and looked for Justin or Ramiro and Taylor because I knew that this was where they would be meeting their friends, and it was about 11 o’clock. I soon found all three of them, sitting together and sharing lunch. 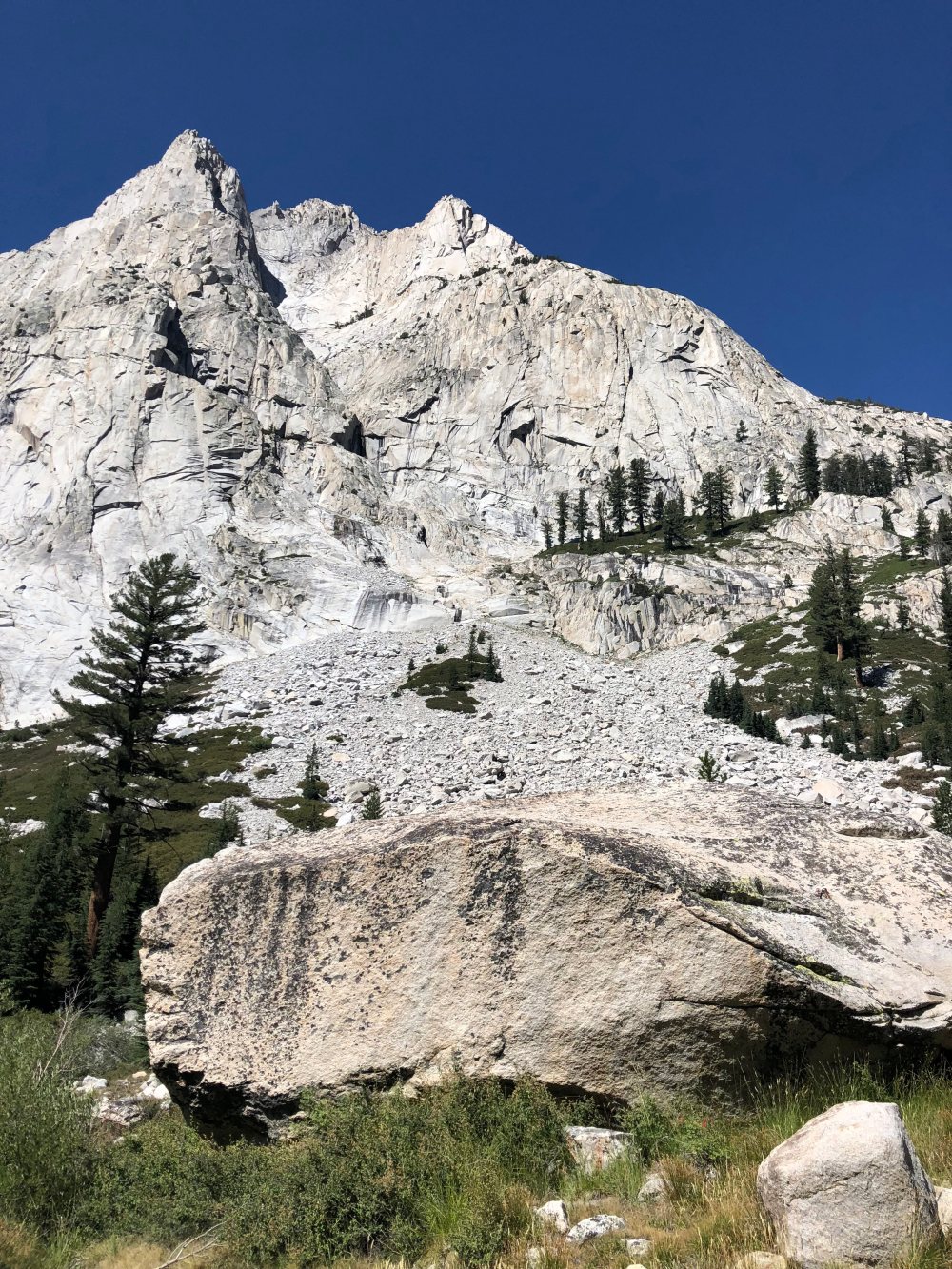 I ate some lunch too, and before long Ramiro and Taylor’s friends showed up! I don’t remember their names (I’ve gotta get better at writing this stuff down!) but they were three guys about my age. They brought Taylor and Ramiro’s food resupply, as well as fresh vegetables and homemade cookies and zucchini bread! (Zucchini bread is one of my all time favorites!) We had a feast! Justin ended up leaving before anyone else because he was going to try to get up the Golden Staircase before nighttime. The Golden Staircase is a section of the trail famous for being extremely steep and switchback-y and facing into the sun, so very hot as well. Most veteran hikers recommend hiking it very early in the morning, or in the evening, the only times of the day when it was not extremely hot. Taylor, Ramiro, and their friends had decided to camp at the base of the staircase that night and tackle it in the early morning. I thought this sounded like a great idea, especially with my ankle still hurting a bit, and decided to join them. We said goodbye to Justin and wished him good luck for his staircase climb.

When we had finished eating, we headed out together and stayed pretty closely bunched up, a big difference from my being able to walk alone earlier in the morning. A few miles in, we were stopped by a pair of rangers who wanted to see our permits and check the bear canisters, the usual. I showed mine and went on my way, but because Taylor and Ramiro (and their friends) were carrying bear resistant bags, which were allowed in that part of the park, they just had to show the rangers that they knew how to properly store and hang their food, so it took a little longer. I took the chance to get away and hike on my own for a bit. I waited for them at the next junction, and we had a nice rest there, eating more food and laughing as Taylor tried to give away some dried mangoes that were heavier than he wanted to be carrying.

As we hiked on, we started climbing in elevation, a sure sign that we were getting closer to the Golden Staircase, and our camp for the night. Even though my ankle was feeling fine, I’m not the fastest hiker when it comes to uphills, so I let the others pass me. One of the other guys was hiking around my same pace, so we were hiking together and talking when all of a sudden he stopped talking mid-sentence.

“Bear!” he repeated, pointing at the trail ahead of us!

and yes, there it was, a bear walking right in front of us and off into the bushes, without even so much as a glance in our direction. It was as if we didn’t even exist. We stood up on some rocks to try to catch a glimpse of the bear as he crashed back into the bushes, but he was soon gone. I didn’t get a picture of the bear because I was too caught up in the moment, but I did get a picture of my face immediately after seeing the bear, so I’ll leave you all with that. 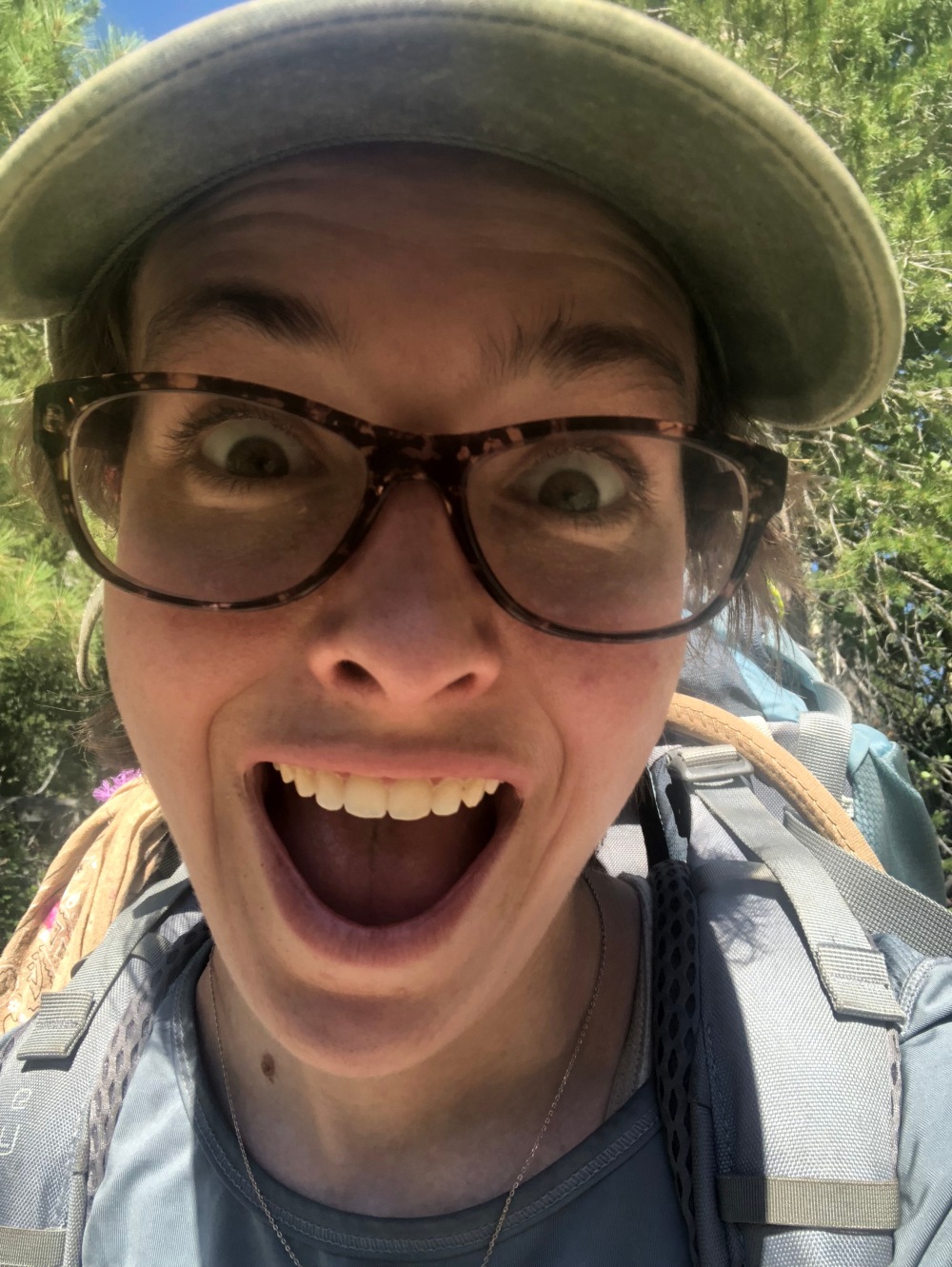 Before long, I had taken a few breaks and the other guy moved on ahead of me and once again I was alone. I put some music on and just kept on walking. It didn’t look too far on the map, and really it was only a few miles but the constant uphill and the way the trail winded around through the trees really made it seem much much further. 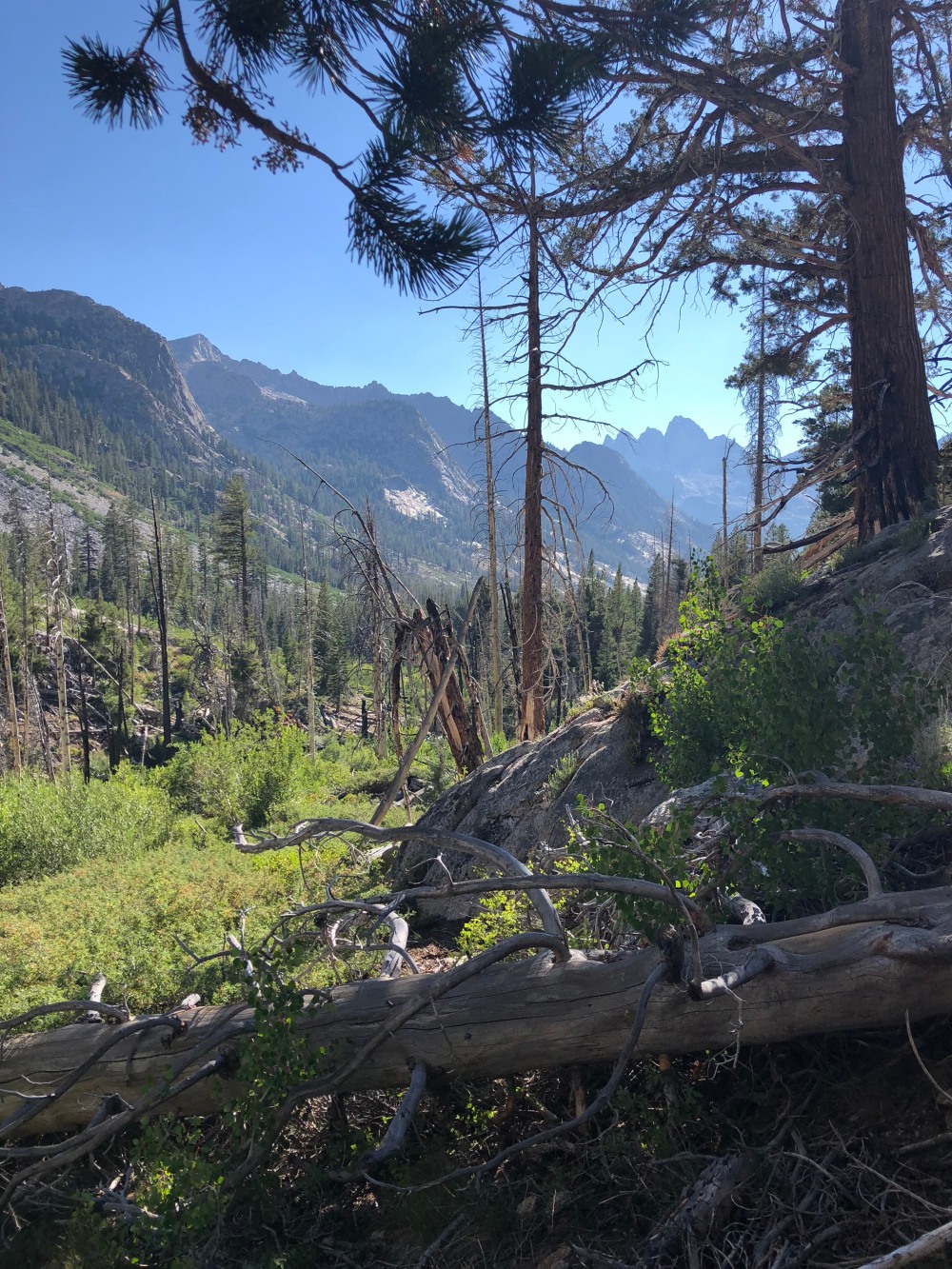 Anyway, I got to the campsite and set up. I was the only one using a tent, everyone else was “cowboy camping” on the ground without any shelter. While that can be fun, call me crazy, but I just really prefer the false sense of security that a tent offers. I washed my feet off in the river nearby and then made dinner. I had homemade chili mac that I had dehydrated myself and was really excited for. My excitement was well founded. It was SO GOOD. Maybe not as good as the prepackaged mountain house chili mac, but I’ll say it was definitely close 😉

We were planning on an early start again, so as soon as the sun started to go down, I got in my tent and everyone else got in their sleeping bags, and we all went to sleep. I stayed up to write in my journal just a little bit, but soon I was falling asleep as well, eager for an early start and a great day tomorrow.

Coming soon! (sorry they haven’t been attached the last few days, my software is being updated and Ill have them out soon!)