As expected, Justin didn’t actually wake up at 4. He got going around 8am and we said our goodbyes. If we each stuck to our schedules, I knew I probably would not see him again.

I had a dehydrated potato-egg-quinoa mixture for breakfast that was a lot better than I expected! I laid out my wet boots and socks to dry and started packing up my stuff. I sat in the sunshine waiting for my things to dry and lounged on a rock, watching two episodes of The Office. Surprisingly, the lake was beckoning me, and because I hadn’t seen anyone pass by all morning, and couldn’t see anyone coming from any direction, I decided to take the opportunity to skinny dip in the lake.

I walked down to the water’s edge and stripped down then jumped in. It. Was. Freezing. It was so cold I felt like I couldn’t breathe. I doggy paddled around a little bit, trying to warm myself up (which didn’t work) and thought about how I should swim more and wasn’t a very strong swimmer. After maybe 5 minutes in the lake, I still couldn’t feel any part of my body, except for my head, which was starting to throb because of the cold, so I climbed out and ran back up the hill to my campsite. I dried off and got dressed. It felt nice to feel clean-ish but I think that was all the lake jumping I could handle for one trip.

Before long, my boots were dry and I was more than ready to get going. I prefer getting up earlier and starting early, but I am glad I waited until my boots were dry, I didn’t want to go anywhere with wet boots. I headed out around 11am, going towards Pinchot pass. As I approached the pass, I saw some horses at the top, winding their way down! I hiked up towards the top until I met the horses, then stepped off the trail to let them pass. It was so nerve-wracking to watch them make their way down the slippery rocks and switchbacks. I would not want to be the person that rides them up and down passes, that’s for sure!

Going down the other side of Pinchot Pass, my ankle started to hurt again, and it took my attention away from the beautiful scenery that I was passing. My goal for the night was the suspension bridge at the Woods Creek Trail junction, and it was not that far, but I was going pretty slowly due to my ankle. I took some ibuprofen and took a lot of breaks.
I found that I couldn’t focus on my e-book, so I played Red Hot Chili Peppers on Spotify and focused on just making it to the suspension bridge. I passed a ranger, but he didn’t make me show my permit, which I found kind of weird but appreciated being able to keep going without stopping.

I met some hikers that were doing the Rae Lakes Loop, which is a trail I want to do soon and answered some of their questions about the JMT. It was nice to have some conversation but at the same time, I really just wanted to get to the suspension bridge and set up camp.

After a long downhill, I finally arrived at the Suspension bridge. It was a very odd sight, a big metal bridge in the middle of nowhere, with kids playing in the river below. I expected a bigger, more dangerous, faster-flowing river for them to build a huge suspension bridge over it but it was pretty calm and had almost no current. Weird.
The campsites on the other side of the bridge were super full and I was discouraged. I didn’t really want to have to share a campsite with anyone and I wanted to sleep without being kept up by people nearby talking. I decided to keep going up the trail a little bit and see if I could find a more secluded spot to camp for the night. 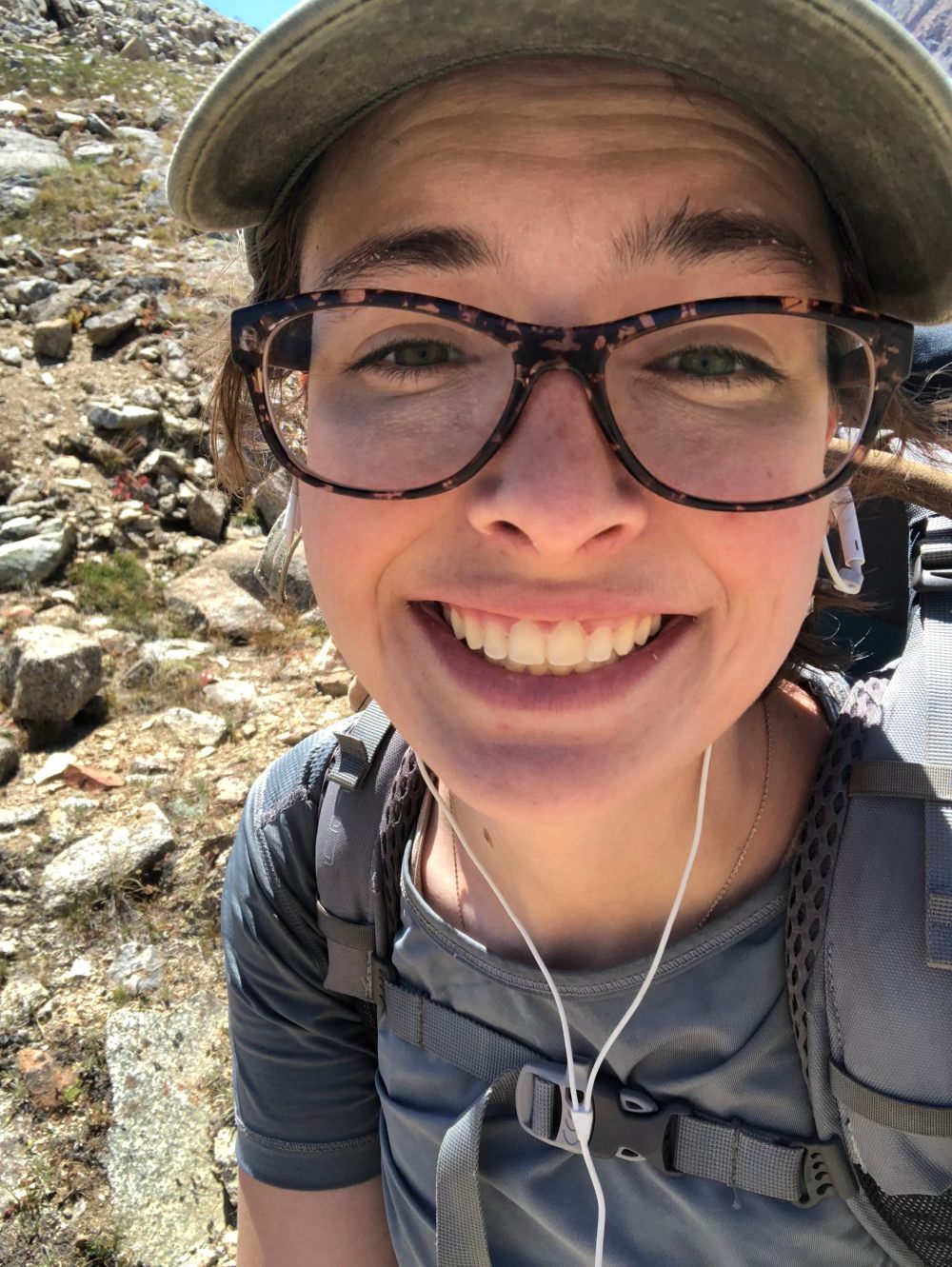 I went up a hill and over a short ridge and saw a clearing just a little ways off the trail! Perfect! As I got closer I saw there was already someone there, setting up a tent and I almost turned around, but then I noticed that it was Lauren, from the group of the three girls that I had met the day before! I walked over to her and said hi, and asked if I could set up camp with them that night. She said yes and I was setting up my tent when the other two came up and joined us.

We made dinner (I had thai rice and sweet and spicy tuna) and talked about a lot of things, including a discussion about “girl issues” on the trail. It was super refreshing to have other girls around to talk about the things that the boys didn’t necessarily experience, like dealing with periods and unwanted attention from male hikers, as well as male hikers ‘mansplaining’ hiking things to us. For example, in one of my prep hikes for the JMT, a man ‘explained’ to me how I should tie my shoes while hiking….after I had hiked 6 miles to the peak of the mountain we were on, which he had driven to the top of. *eye roll*

It was fun to bond with the girls, but soon it started to get dark and I knew I wanted to get an early start in the morning so I retired to my tent and covered my ankle with Icyhot. It felt great, I would definitely recommend bringing some along any hike!
See you tomorrow!
-Pepper
Stats: Coming soon