I woke up at 5:30 and ate my breakfast. I took my time drinking my tea, but I was still on the trail by 7:00! I started heading towards Bighorn Plateau but by 7:20 I could tell something was wrong. My stomach was in knots. I stopped to go to the bathroom. I’ll spare you the gory details, but it was not a normal bathroom experience. I didn’t feel any better but kept going. Not even 20 minutes later I needed to go again. and again and again, every twenty minutes or less. This was not good.

When you are hiking across a long, flat stretch of land with no tree cover, and barely even any large boulders along the way, having this kind of problem is not easy, nor is it fun. I got as far as I could across the plateau, then found a grouping of boulders slightly off trail and ran to it. I spent about an hour there, drinking water and taking electrolytes and desperately looking through my first aid kit for anything remotely close to Imodium or something that would settle my stomach in any way. Nothing.

I sat there and tried to enjoy the view, thinking that one day this might be funny (update, still not funny, nearly a month later) and trying to enjoy my last full day out on the trail. I thought back to what I had eaten the night before, trying to remember what it was that might have sent my stomach in such a bad direction. Maybe it was the water I drank from that lake without filtering? Was this Giardia? But I had unfiltered water at other points and was fine. I still don’t know what it was. I sent my mom a message on my InReach about how I wasn’t feeling well. At that point, all I wanted to do was crawl into bed and not be out on the trail anymore, but just like the day before, my only option was to embrace the suck and just keep walking. I waited until I had felt reasonably okay for what felt like long enough, then got back up and kept going.

I had just reached the treeline when I felt my stomach lurch again. Thankfully I had tree cover again. I decided to take a longer break and try to eat some food. I ate some of the trail mix that I had been given the day before and it was probably the best trail mix I’ve had. There were hazelnuts, cashews, m+ms (which were purple) and I think even some macadamia nuts! So good. I think she said she got it at Trader Joe’s, but I don’t know if it was prepackaged or if she put it together herself, I’ll have to try to find it. While I was eating the trail mix, I also remembered I had packed some Tums in my toiletry bag, just not in the first aid kit where I was looking! Yes! Thank you past self for your planning!!! I took some tums and soon started feeling better.

As I headed up the trail, I started to notice some pretty weird looking animal footprints, unlike anything I had seen on the trail thus far. They looked too big to be deer prints, but were shaped kind of like deer prints, just a lot wider. They had a pointy section at the top, kind of like a cow. I was so confused! I passed a hiker coming down some switchbacks and he made a comment as he passed by,

“If you hurry, you’ll see the Llamas at the top of the switchbacks!”

LLAMAS??! I’ve heard of the pack mules, and I’ve seen the pack horses, but I had not heard of Llamas, or seen any. But this solved the mystery of the footprints. I hurried up the switchbacks, eager to see some Llamas. They were not at the top of that one, or the next, but eventually, I found them. I learned that they were $95 per day to rent, could carry around 60 lbs and it was mandatory to take a 2-hour training session before taking them out on the trail. Personally, I wouldn’t want to make a llama do all the work for me, I feel like I’d be cheating by doing the trail with a llama, but they were cute and super fuzzy, I’ll give them that. 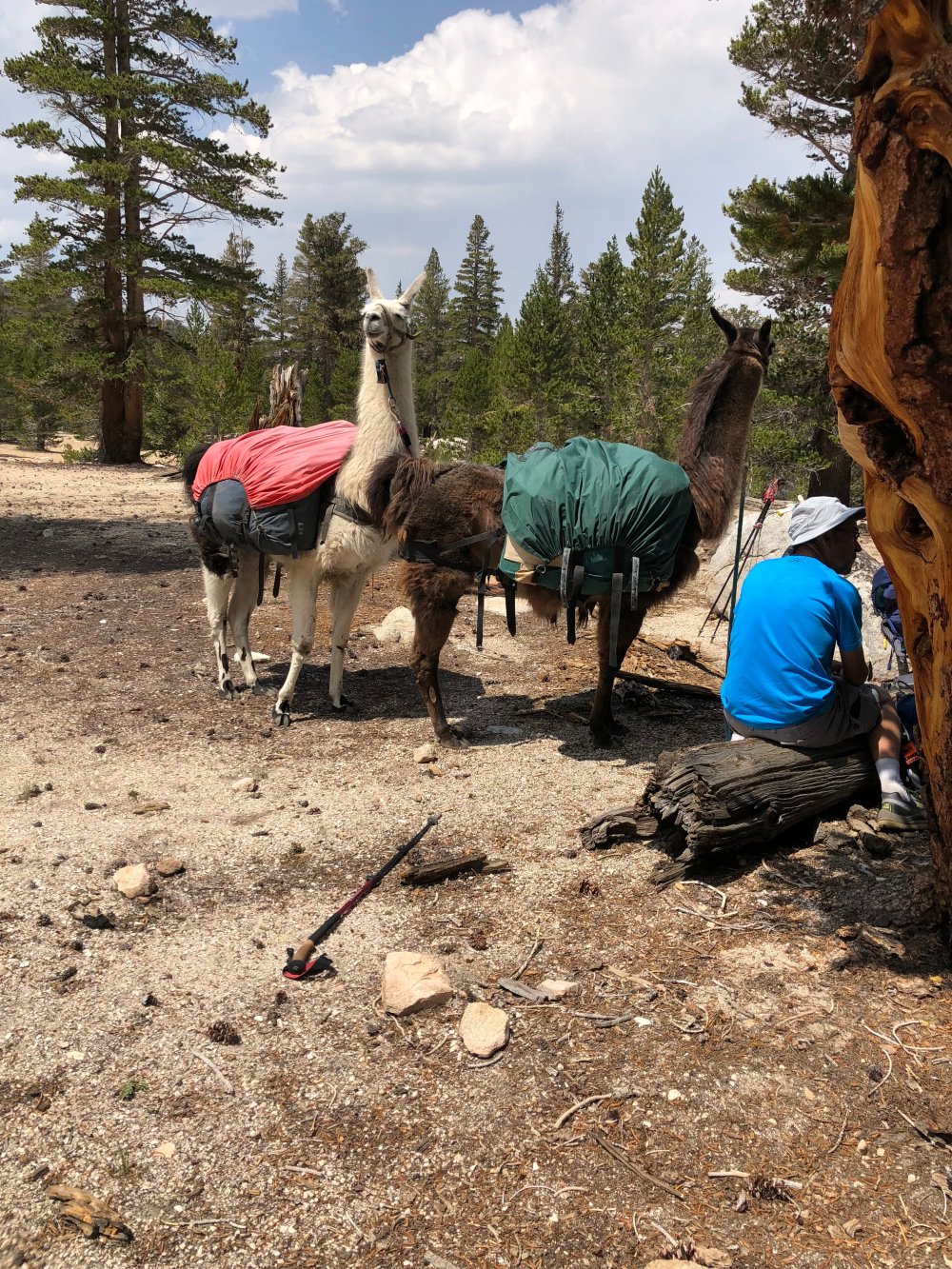 I continued on down the trail and before long I was approaching Crabtree Meadow, and heading toward Guitar Lake, my final destination before Summitting Mt. Whitney. As I walked toward Crabtree Meadow, I thought about all of the friends I had made and what a great time I had, and also the difficult and painful times. I reached a point in the trail where there was another sign for Mt. Whitney: 7.5 miles. I took a quick selfie with the sign and then started crying. This has really been such a fantastic experience, and it wasn’t even over yet. I couldn’t believe how much I had grown and learned about myself and my limits in the past two and a half weeks. And the biggest challenge was yet to come, staring me in the face. Just 7.5 miles away. 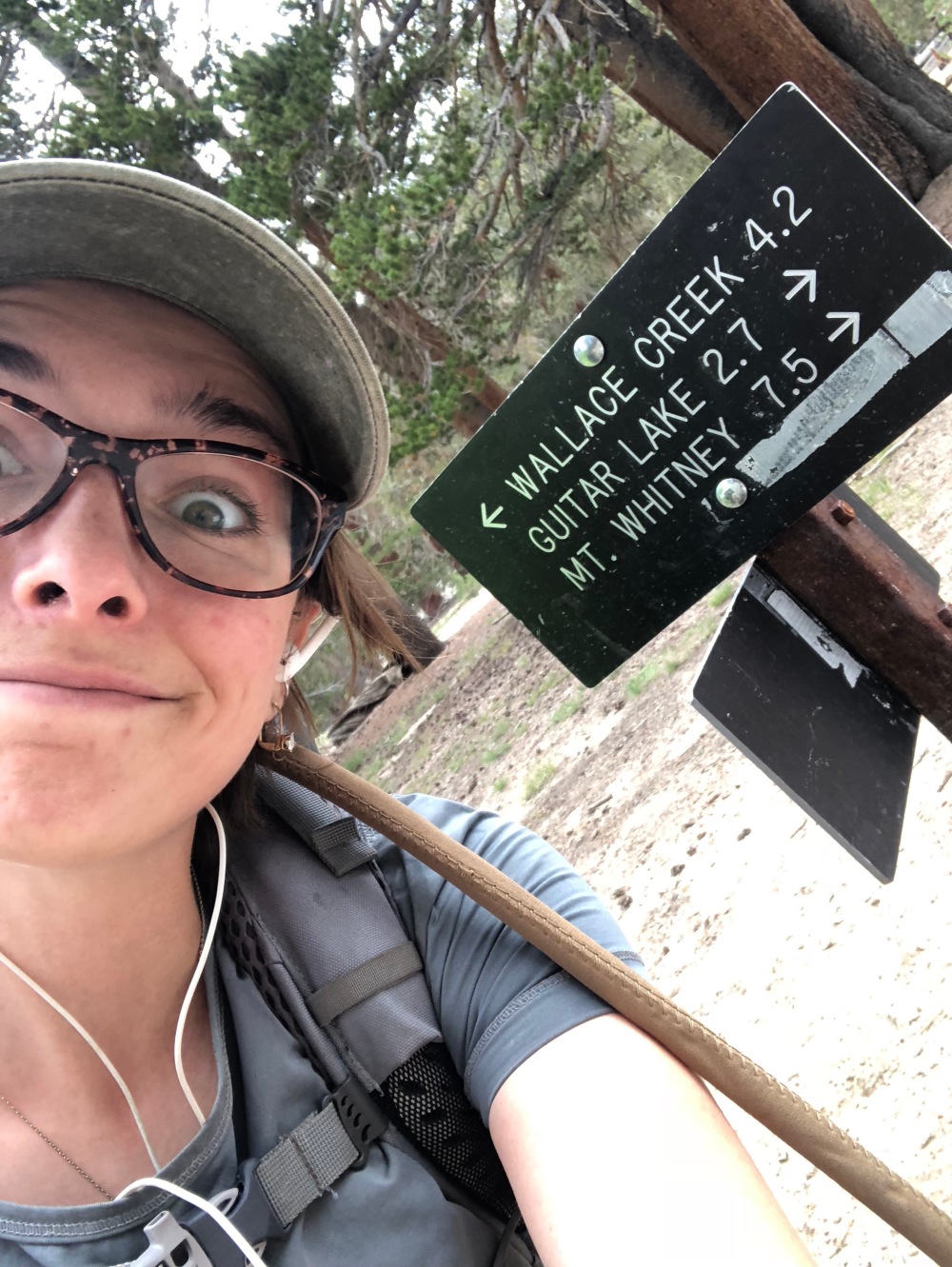 As I continued on up to Guitar Lake, my resting spot for the night I watched storm clouds begin to gather. I played a game with the dark sky, putting on and taking off my rain jacket in the drizzle about 5 times before it really started to continuously rain. I pressed on, just one more step. How much further? Ehh, a mile, mile and a half! 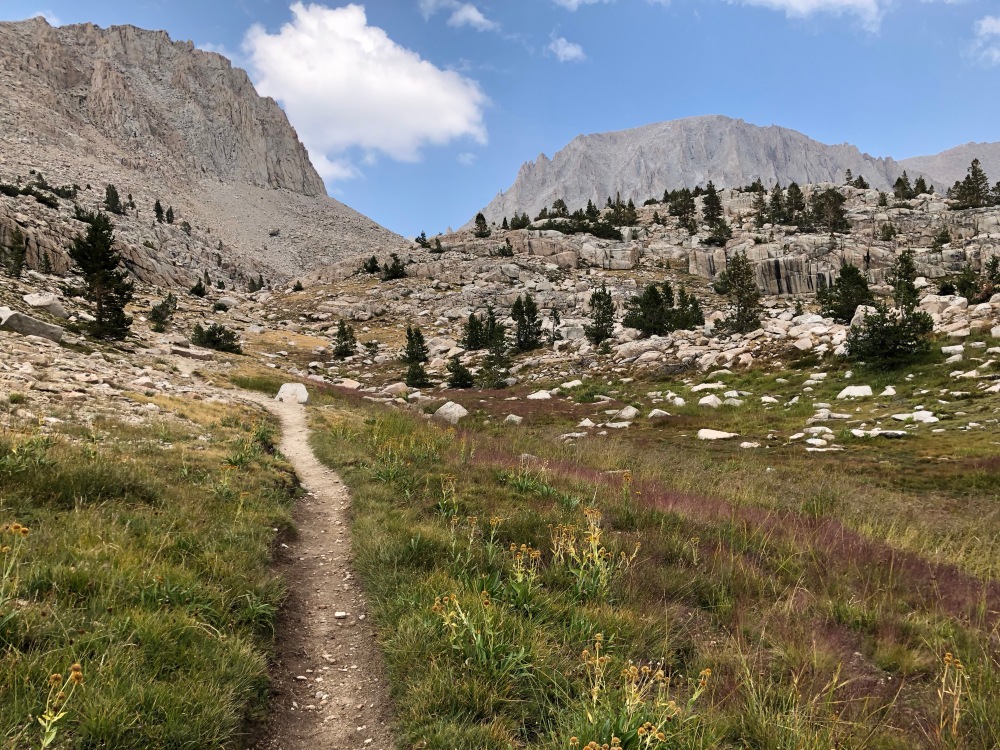 I got to guitar lake during a break in the rain. It was around 3pm. There were a few tents dotting the landscape, but far less than I expected and none that I recognized. Everything was wet, but I found a relatively dry spot and quickly set up camp, staring at the sky and listening to the booming thunder. I crawled inside my tent and wrote in my journal a little bit, as the rain grew heavier and then subsided again. 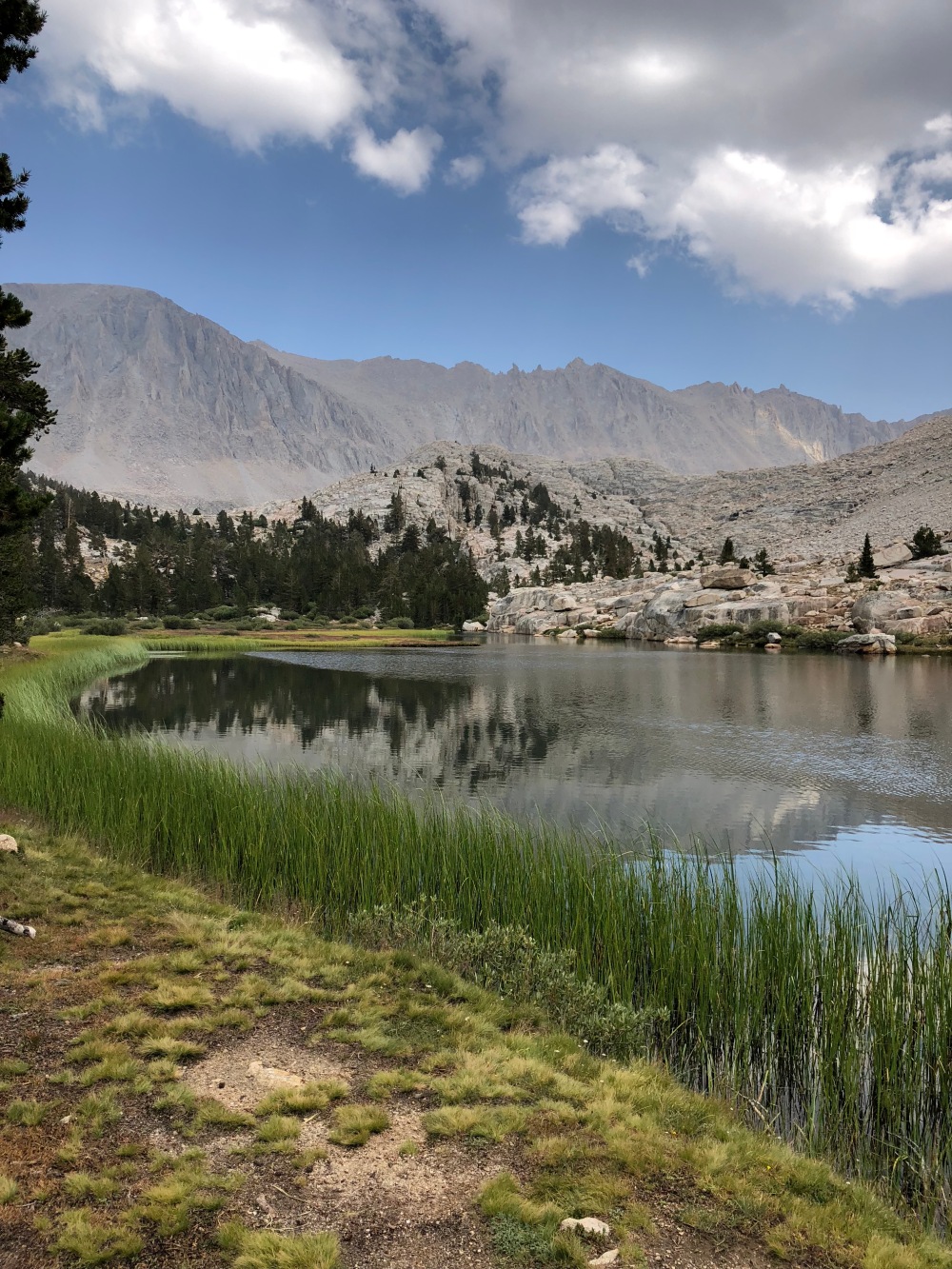 I took advantage of the lull in the rain to pull out my stove and make dinner. I made some beef stroganoff and the mashed potatoes that I had been given the day before. I ate the mashed potatoes first and they were delicious but filled me up quickly. I couldn’t finish the beef stroganoff, so I put it back in my bear can, planning to eat it later. I was planning on being on the summit of Mt. Whitney at sunrise, which would require me to wake up around midnight or 1am to start hiking, so I figured I’d go to bed, especially because it was still raining. I nestled into my sleeping bag and tried to drift off to sleep.

About 40 minutes later I was woken up by blinding sunlight, and heat. The rain had stopped and the sun had already dried most of the outside of my tent! I heard some people talking outside and stumbled out of my tent to see what they were talking about. I met my tent neighbors. One was an entrepreneur from England and the other was a doctor from Seattle. The Doctor was starting a northbound JMT Trip, this was his first or second day. He had come from Whitney Portal the day before, skipped the summit of Whitney and come down to guitar lake to camp for the night, then planned on summiting Mt. Whitney in the morning, also at sunrise. I thought this was a rather unconventional way of doing it but hey, hike your own hike I guess! 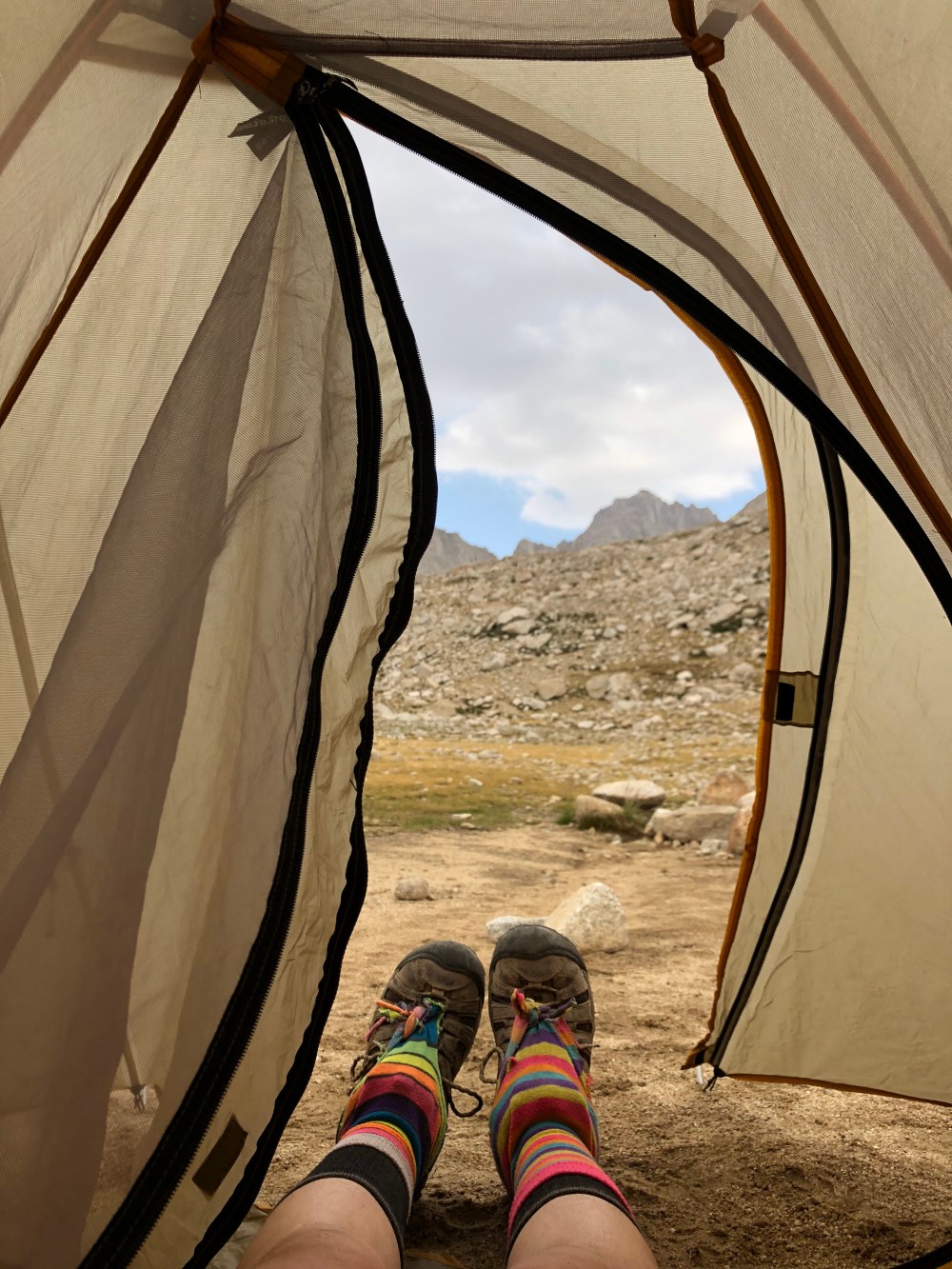 I talked with my two neighbors for a while, then refilled my water bottles and excused myself back to my tent. I had told them that I was planning on summitting at/before sunrise, and waking up at 1am, and they didn’t believe I would actually get up that early.

“I’ll wave to your tent as I walk by it when I leave here at 6am tomorrow”, called the British guy after me as I walked back to my tent.

I am stubborn and I like to prove people wrong when they are wrong. There was no getting around it now, I was waking up at 1am. The ‘brain’ of my backpack comes off and becomes a daypack, (which is awesome) so I pre-packed it with everything I would need up at the top of Mt. Whitney and went to sleep, paranoid about the marmots all over the field, hoping that they wouldn’t find some scrap of food that had spilled and spend their night eating a hole in my tent to get to it.

I drifted off to sleep, thinking about how I would be up on top of the world in just a few hours, not knowing what to think about it, but as excited as ever.