When hiking the JMT, many hikers opt to send their food to resupply points along the trail so they don’t have to carry 20+ days of food with them. Makes sense to me! The most popular resupply points are Red’s Meadow, Vermillion Valley Resort (VVR) and Muir Trail Ranch (MTR). The prices for sending and storing a resupply bucket are anywhere from $40-$80, not including shipping! These can get super pricey, so I went to look for a more affordable option.

I found that with a little bit of planning, and a little extra time, you can drop off your resupply bucket at both Red’s Meadow and MTR (or close by, we’ll get to that later)

To drop off your resupply in person at Red’s Meadow it is $3 per day that they hold it for you, with no holding fee. You have to take a bus to Red’s Meadow because no public vehicles are allowed during the busy season but the bus is only about $7 for each person, not too bad!

To drop off your reply at MTR, it gets a little more complicated. You can hike it all the way into MTR if you wish, it only costs $25, but that means hiking 8-10 miles with a heavy resupply bucket.

A second option is to drop off your bucket at Florence Lake Store and they will ferry it across the lake and bring it to MTR for you, for $30. 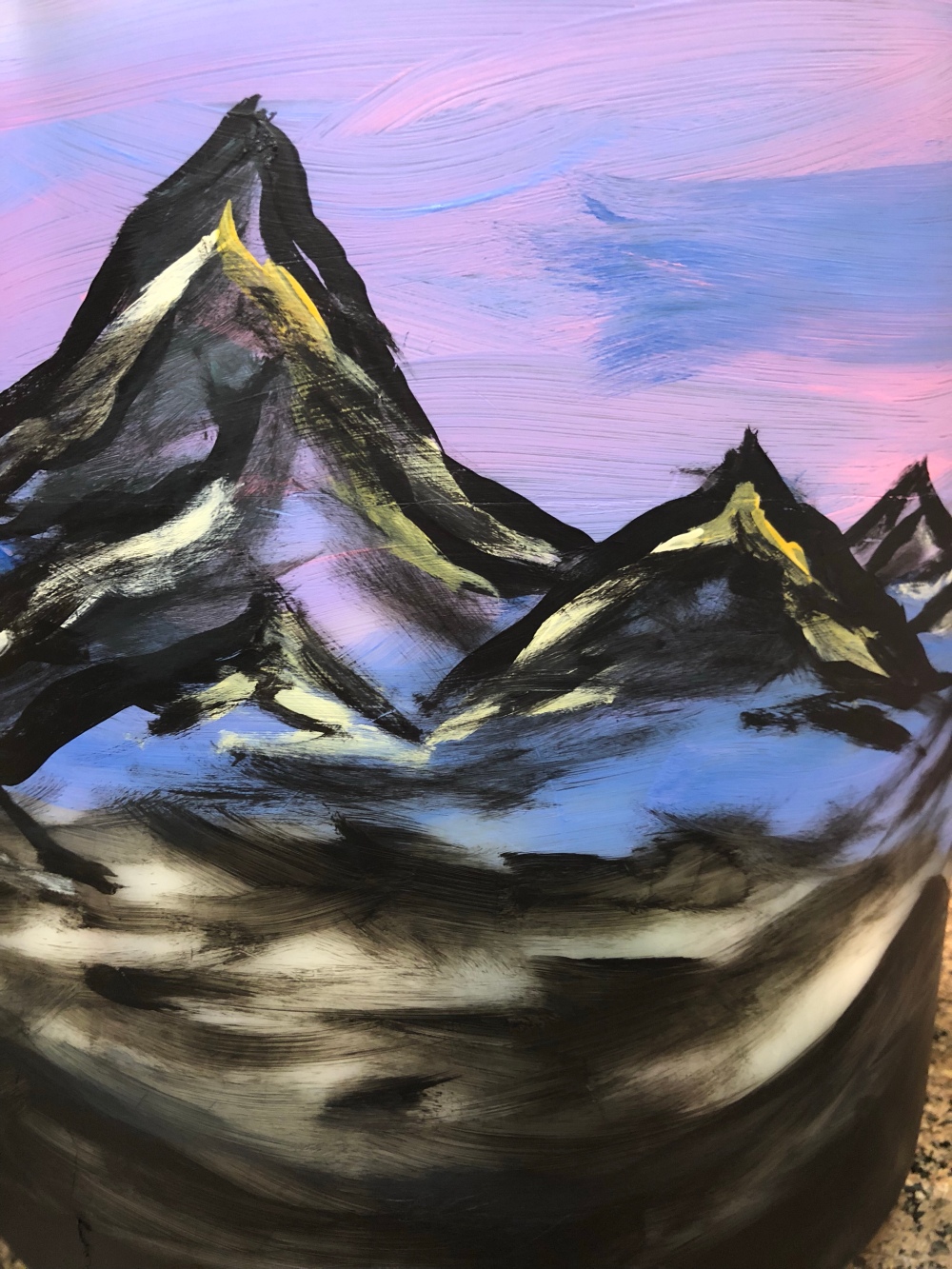 that sounded like a much better option for me so I decided to drive it up there a week and a half before I started my hike, and about 2 weeks until I’d be arriving at Muir Trail Ranch. My awesome friend agreed to come along with me, and we set out at 6am after meeting up at Starbucks for some much-needed caffeine.

The road was pretty rocky and curvy, and there were some sections that were pretty nerve-wracking, especially when we had to pass cars going the other way on the narrow one lane road, but the views from the road made up for the scary passes. The whole time I was so excited to think that in just a week, I’ll be hiking through this gorgeous place! (Well, a few miles east but you get the idea).

We made it down to the Florence Lake Store at around 11am and stepped out of the car into mosquitoes, sunshine and the serenity and majesty of the mountains. 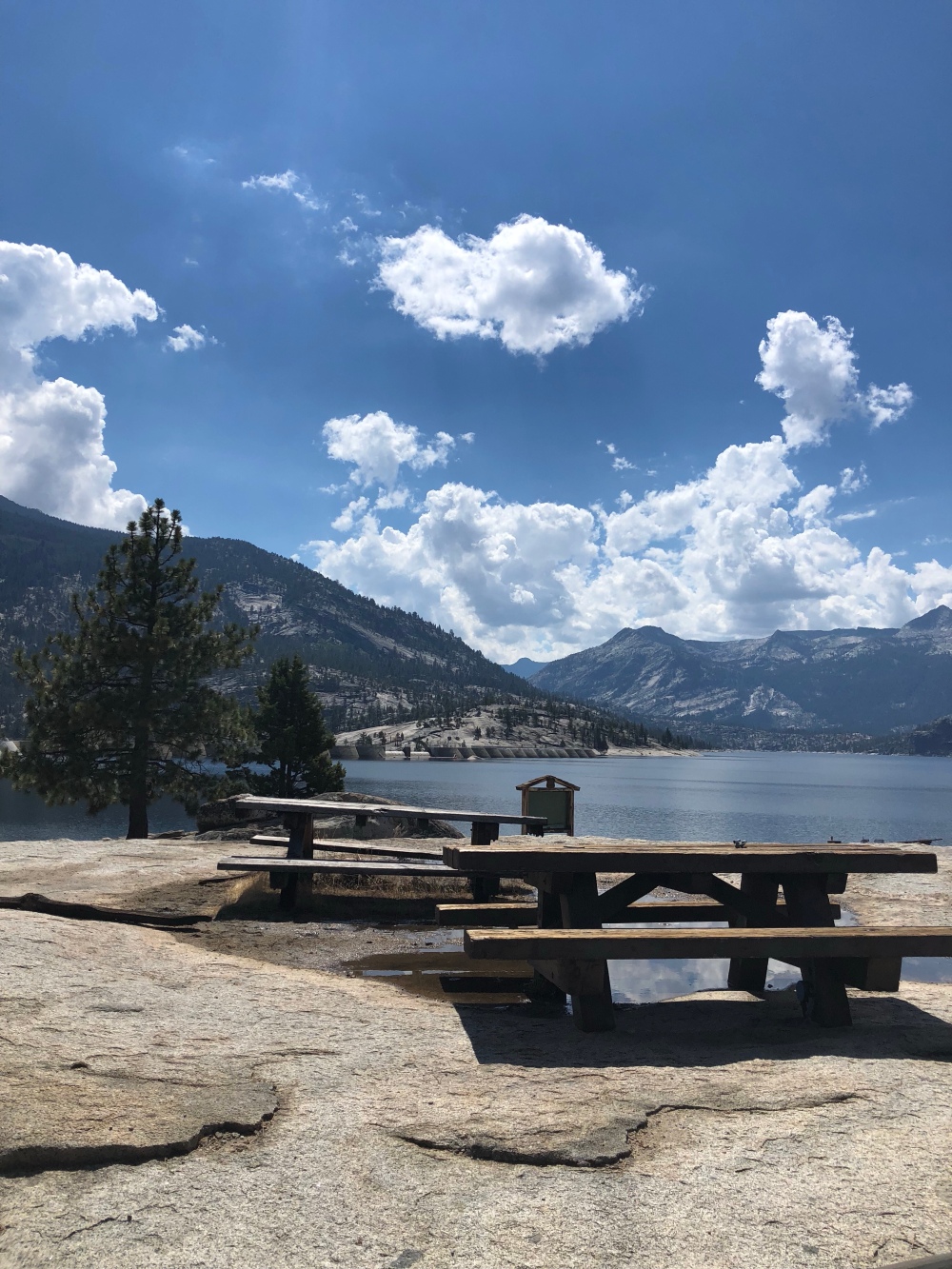 I dropped off my resupply bucket and chatted with the super sweet lady working at the counter, Charlie. We asked her where we should go for a quick exploring side trip in the area since we were up there and she recommended that we check out a spot on the river with a slide-rock where you could slide down into the river!

The slide-rock sounded fun but my friend had a new tattoo that couldn’t get wet and I didn’t really feel like getting in the water, plus there were a bunch of guys down in the river and we didn’t feel safe going down to the shore, so we just drove to a spot above the river, took some pictures and then headed back to the car. 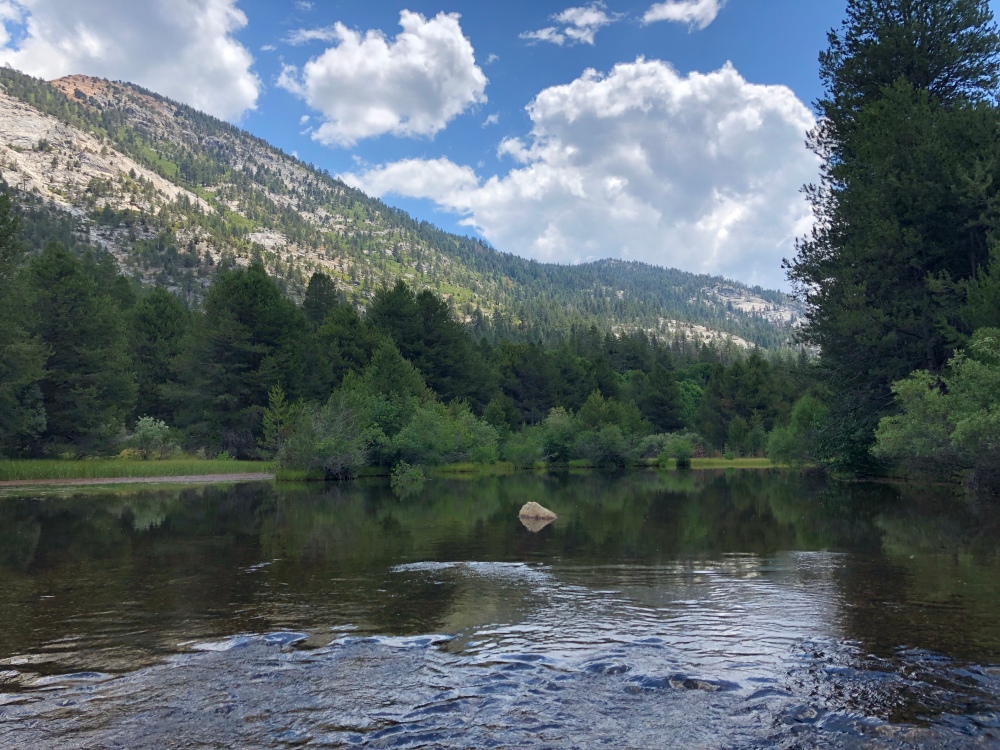 We were back on the road, bumpy, one-lane and super fun when we heard a pretty loud grinding sound that shouldn’t have been there. We got out and checked, but everything looked fine. There were a lot of rocks, one probably just got too close for comfort, but there were no dashboard lights on, and nothing else seemed wrong, so we kept driving. We got off of the twisty area and into a nice smooth area next to a gorgeous meadow when we heard a small and quick *pop*. We looked at each other.

I got out, and sure enough: a flat tire. The tiniest little puncture hole had split a little bit and the tire was a goner. With no cell service but a pretty well-traveled road, we felt frustrated but hopeful. I put on my hazards and not even five minutes later, as we were getting the spare tire out of the back of the car, a couple on a motorcycle stopped to help us. I know how to change a tire but I appreciated that someone stopped to help. We found out pretty quickly that the spare, the jack and everything we would need to change the tire was there, but the lug nut tool was missing. I have a Volkswagen, and Volkswagens have a locking lugnut system for theft prevention. It’s pretty nice until you’re stranded on the side of a mountain without the tool you need in order to fix your problems yourself!

We thanked the couple for stopping and trying to help, but there was nothing else they could do at this point. They rode off and we weighed our options. We were about 9 miles from the closest town/cell service and the mosquitos were eating us alive, so we decided to flag down the next car that drove by.

A few people drove by without stopping but what a car did slow down, we explained our situation, and the man offered to drive us down to the town. Ignoring years of ‘don’t talk to strangers’ being drilled into our heads, and me gripping my knife and pepper spray tight, we grabbed our important belongings and got in the car.

The man that picked us up was very nice, thank goodness and dropped us off at a small store off of the marina. We called AAA and they told us that because the car was on an ‘unmaintained’ road, they would not be able to help us and we would have to pay out of pocket for the tow truck, an estimated $460!! The road was asphalt all the way up to where the car was, and I guess it was listed as being unpaved. Another dead-end.

We called the nearest auto repair shop (which also happened to be the nearest Tow Truck company) with the details of the lug nut remover and found out that they had one and they told us that if we could get to their shop, they’d let us borrow the tool as long as we returned it after we were done. Success!! The only problem was that we were a 9-mile, 15-minute drive away from our car, and a 20 mile, 35-minute drive away from the auto shop that had the key. 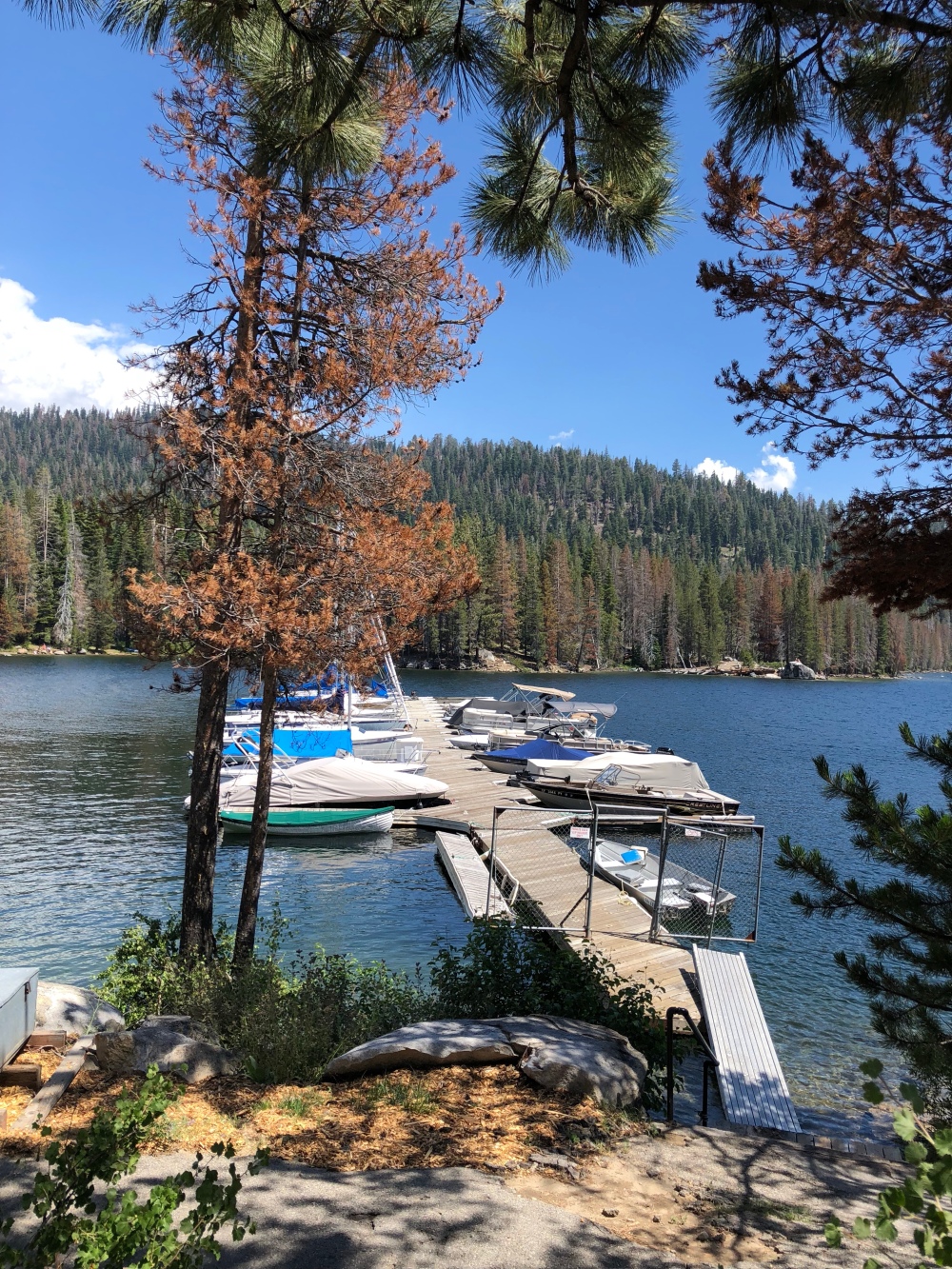 My friend’s dad had been in law enforcement for years, so we called him and he helped us get in contact with CHP (California Highway Patrol). We explained our situation and they contacted the Tow company and also sent an officer to take us back to the car and wait with us while the Tow Truck company sent someone with the lug nut unlocking tool we needed.

While we waited for the officer to come and pick us up, we got some instant ramen from the store and sat by the lake, thankful we wouldn’t have to attempt to hitch-hike or be questioned by any scary strangers. 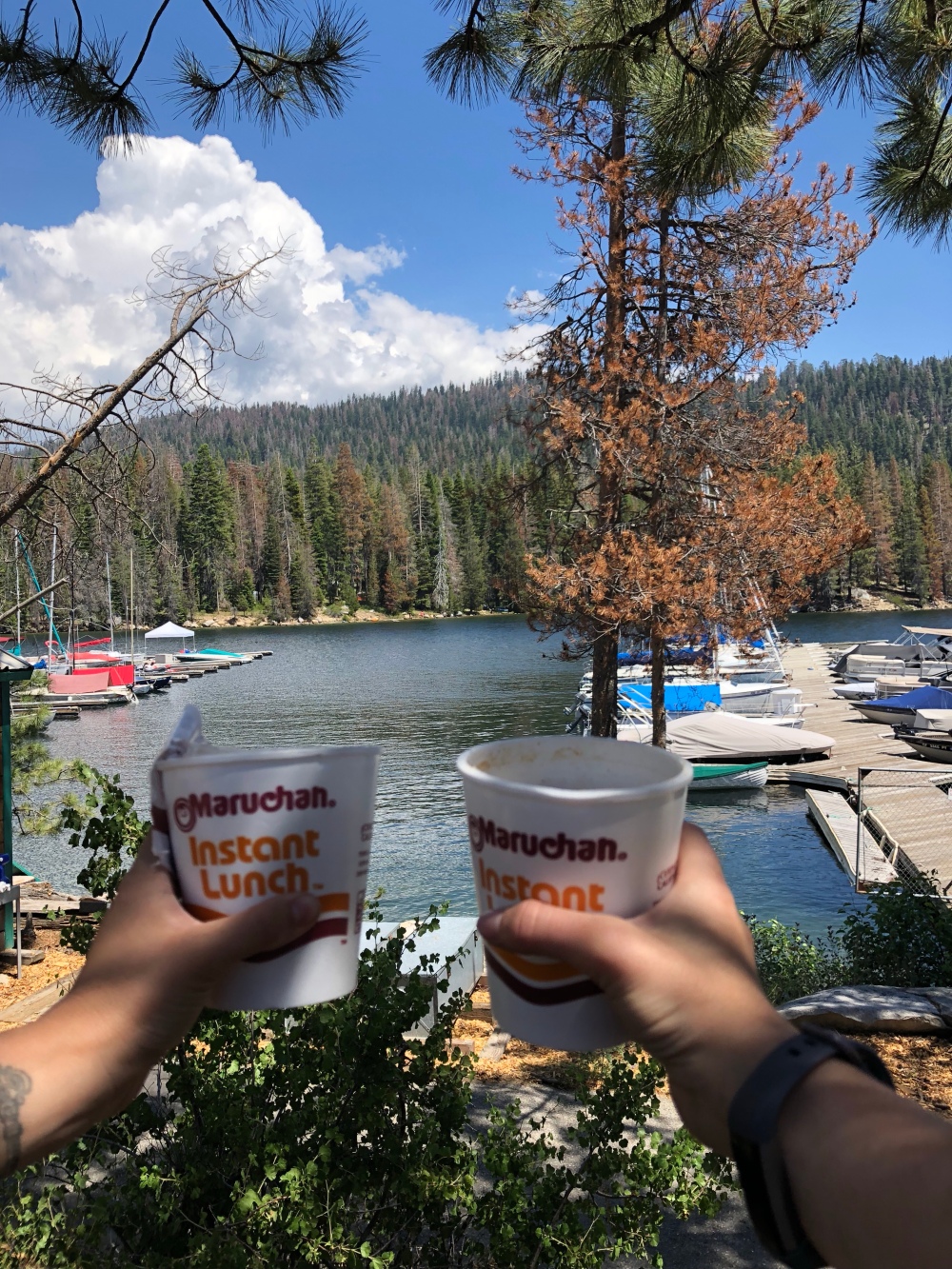 We had waited with the officer for an hour an a half when we started questioning whether or not the Tow Company was coming for us. The officer called and found out that the guy from the Tow Company had gotten to a gate where he thought we were, didn’t see us, and had TURNED AROUND and gone back where he came from. The officer asked him to please come back and told him that yes, we were still waiting.

We waited another hour and a half when suddenly, some large wild animals came crashing through the trees!

Free range cows, about 15 of them, meandered their way around us and went along their business not really caring about us, our car, our enthusiastic paparrazi-ing of them, or anything else other than where the tastiest patch of grass was. 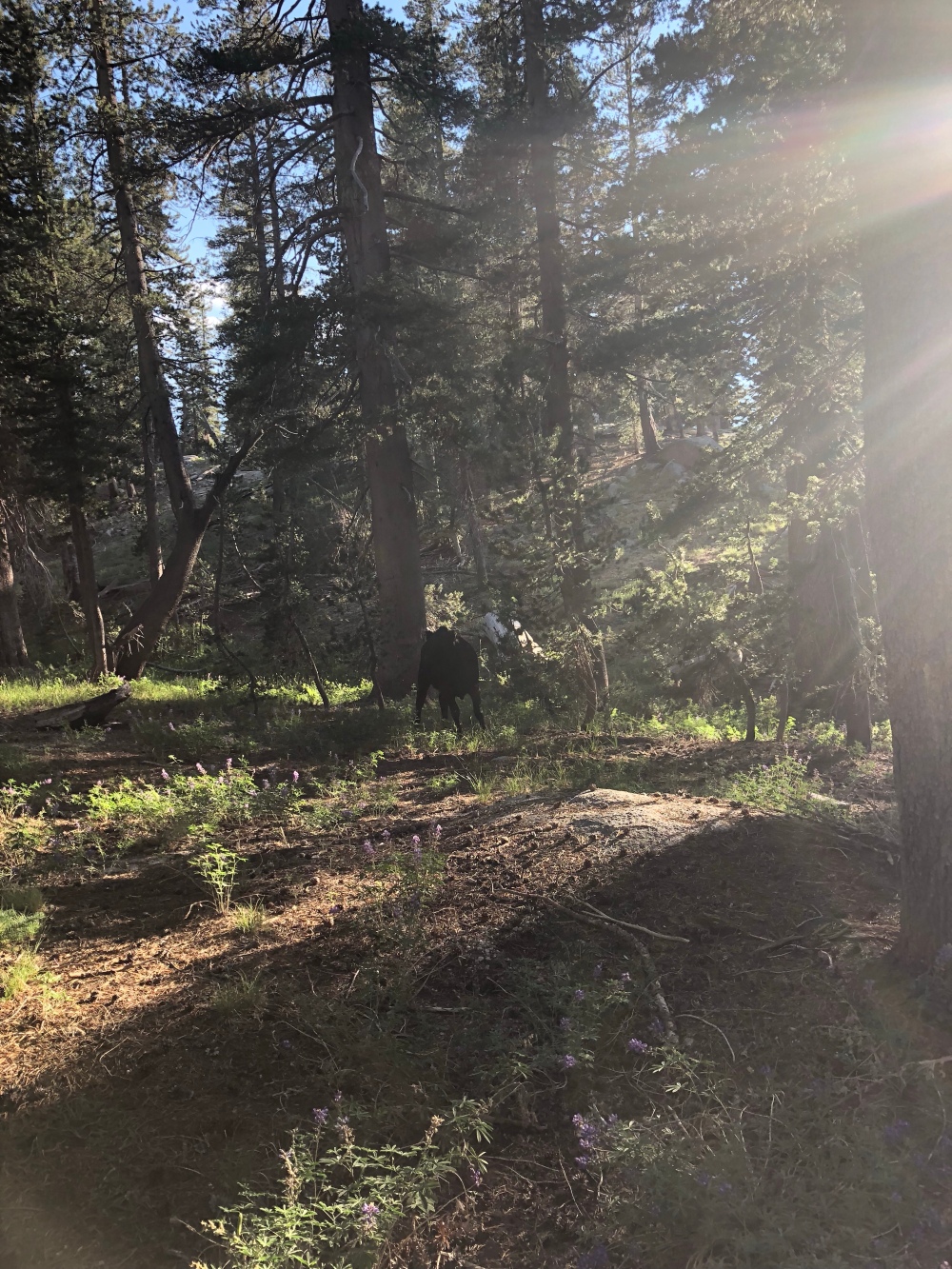 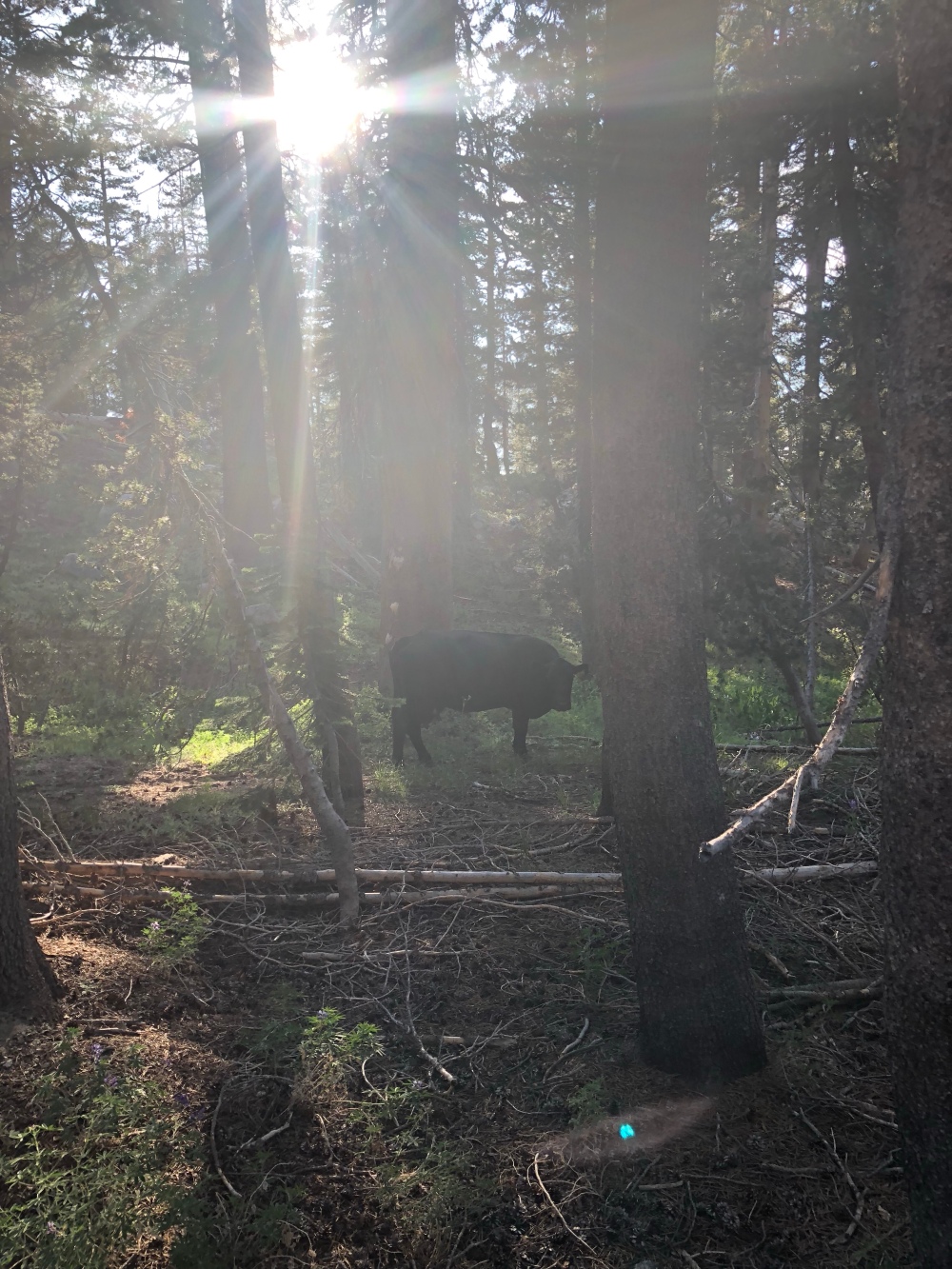 Finally, the Tow Company driver appeared, except instead of bringing the key we needed, he brought the whole Tow Truck instead. Exhausted, hungry and out of options at this point we agreed to load the car onto the Tow Truck and take it to the auto shop where we could replace the tires.

We said goodbye and thank you to the friendly officer and hopped in the tow truck for an exhilarating ride down the mountain. 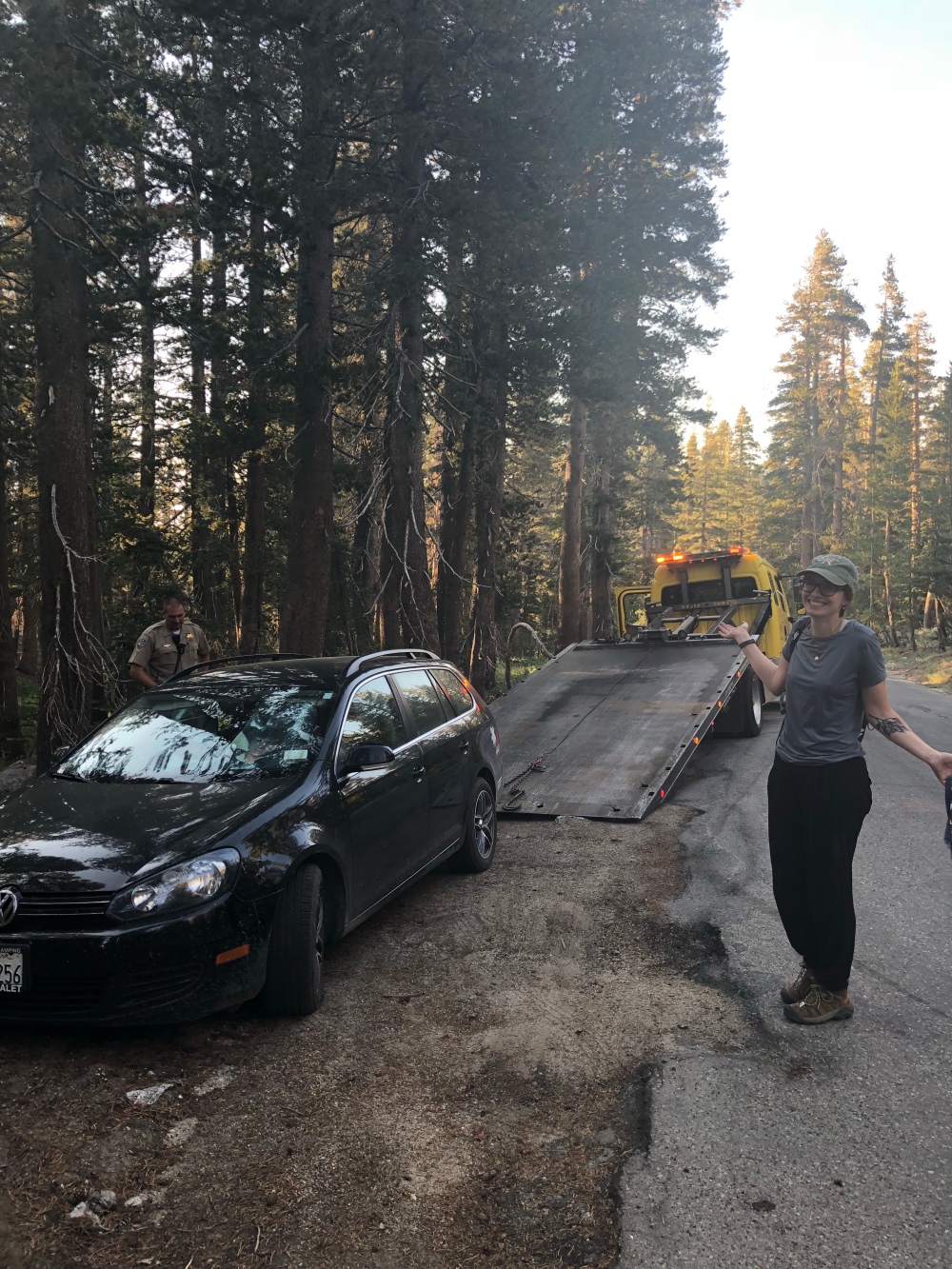 We were driving along down the road, and going pretty fast, especially for a tow truck but I was saying to myself “it’s okay, this guy lives up here, he knows the road and how to drive it, we aren’t really going that fast anyway”

Then the driver said, “sorry if we’re going a little fast, I’m having a bit of trouble getting the truck to slow down.” 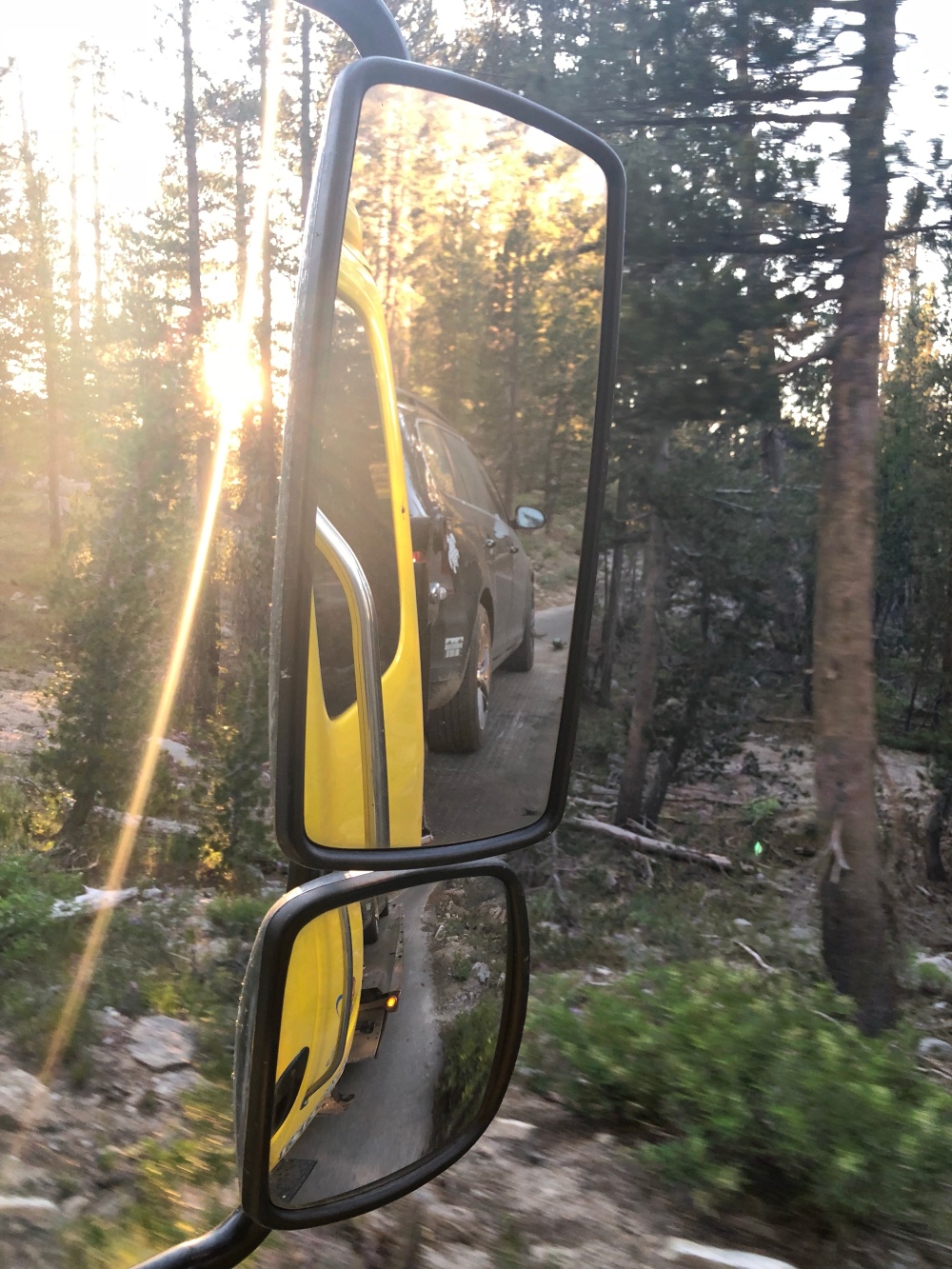 We made it safely down the mountain and to the car repair shop, where they were able to replace the tire, got us set up with some Dr. Pepper, and sent us on our way home. After a very long day, we were more than happy to get back on the road and on our way back home. 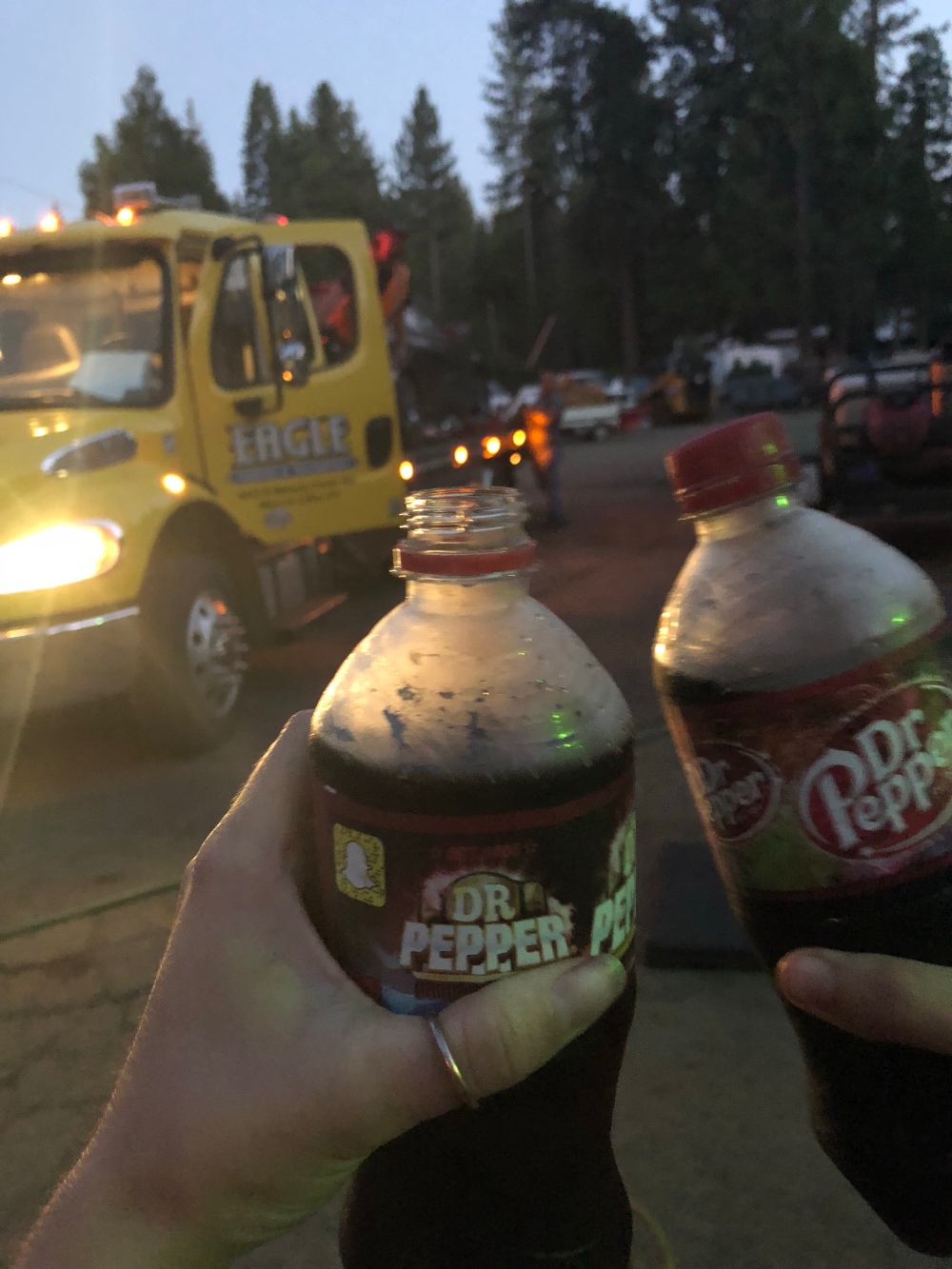 Overall, this was not the worst place to be stranded for a day but because I did have to partially pay for the tow service, although much less than originally quoted, and eventually will have to pay for a new tire once I get back from the JMT — I leave in a week! — gonna deal with all the car stuff after. I totally did NOT save any money by dropping off my MTR resupply bucket. I only recommend dropping off your bucket if you have a large truck that isn’t afraid of some pokey rocks.

I am really thankful that I was not alone for this ordeal, big shoutout to my friend for coming along with me, I can only hope that she will want to go on ‘adventures’ with me again in the future! 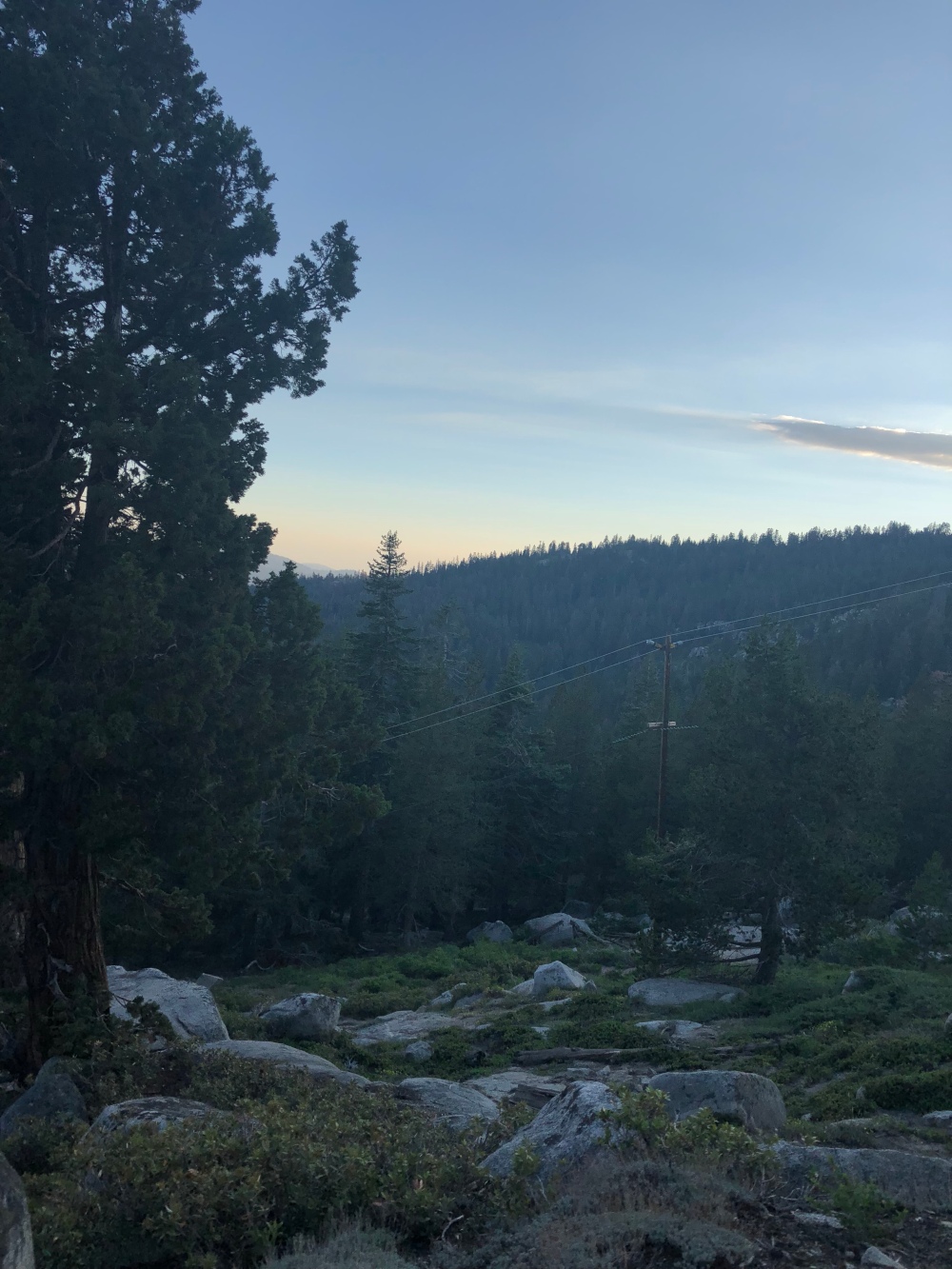 Until next time — and hopefully with less car troubles!