The night passed uneventfully. I woke up really early and had a quick no-cook breakfast of Cheerios and an energy bar. Jeff wasn’t awake and I packed up my campsite pretty quickly and left. To add to the list of “things that suck about being a solo female hiker” I then felt bad that I had felt nervous about sharing a campsite with a stranger. Oy.

Today I am going to try to make it to Red’s Meadow to pick up my resupply. I still have a full two days of food, so I don’t need to get there but that is where I am supposed to be according to my schedule and it isn’t too far away distance wise. There is some elevation however so I will just try to get as far as I can and end up wherever I end up. 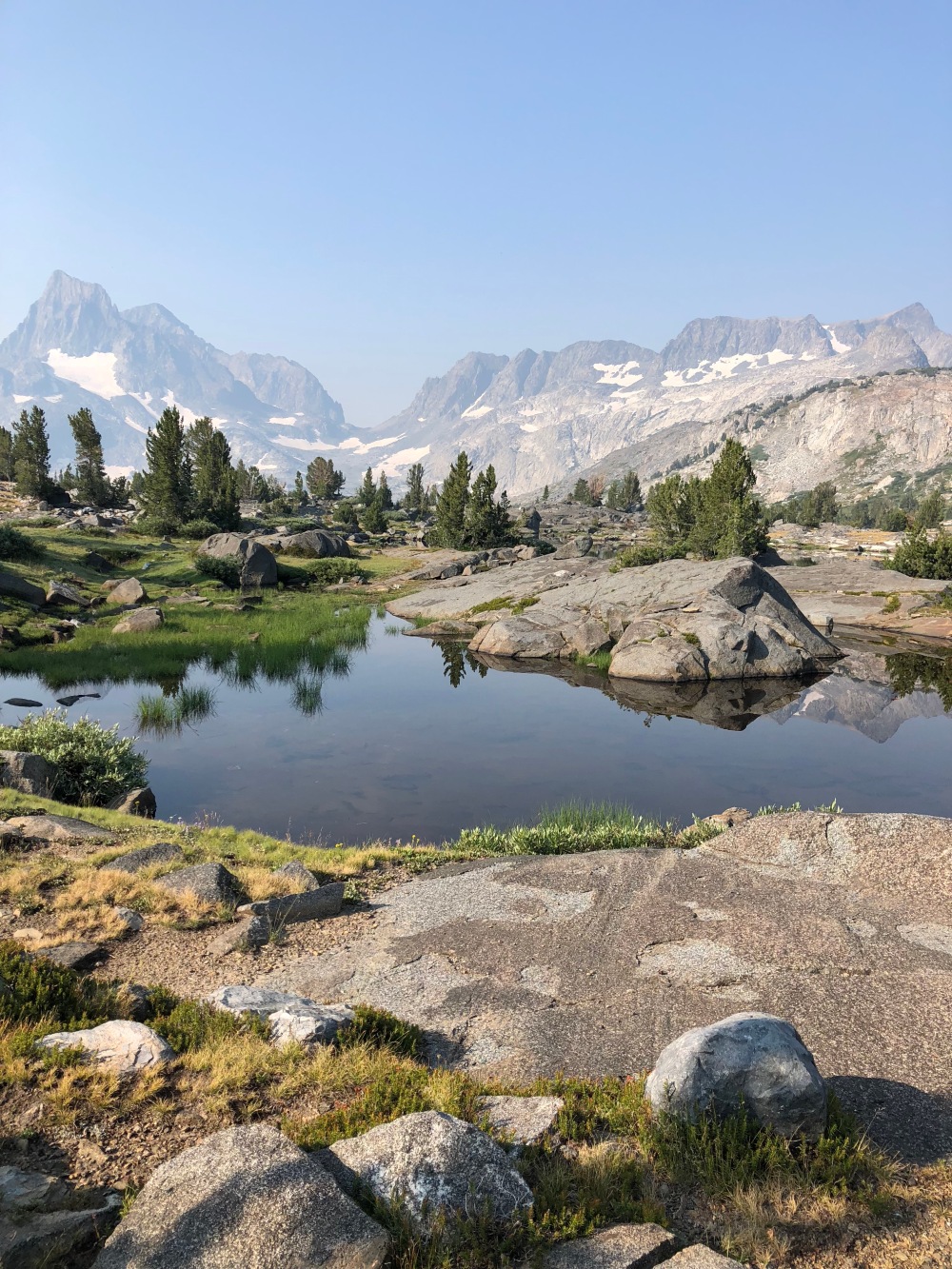 My nose was pretty stuffed up, I later realized that it was likely because of the smoke that I had been breathing in for the past week, but at the time I thought that I might be coming down with a cold and really wasn’t looking forward to hiking if I was going to be sick. I decided to make the most of the day and try to get as far as I could because that meant that if I woke up feeling worse, at least then I’d have fewer miles to go and still be able to stick with my original schedule. 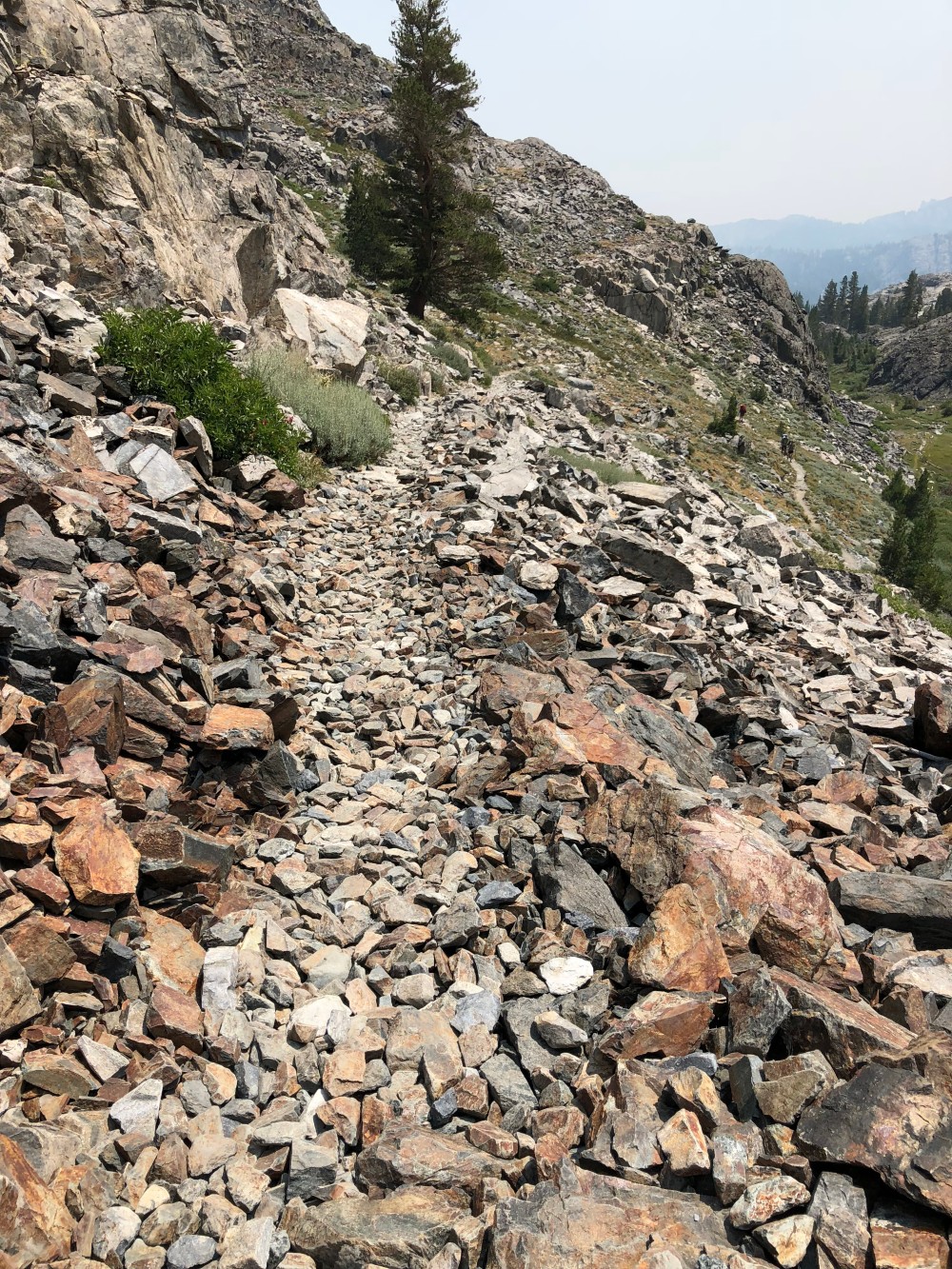 I made good time as I hiked past 1000 Island lakes, one of the prettiest sights I had seen so far. There were some people who had gone off of the trail and were hanging out near the lake, occasionally jumping in and then getting back out and drying off. It looked really fun but I didn’t feel like stopping, so I took out my map and focused on a footbridge near Garnet Lake and decided to make that my goal for lunchtime, maybe I’d jump in the lake then too, I’d see how I felt. 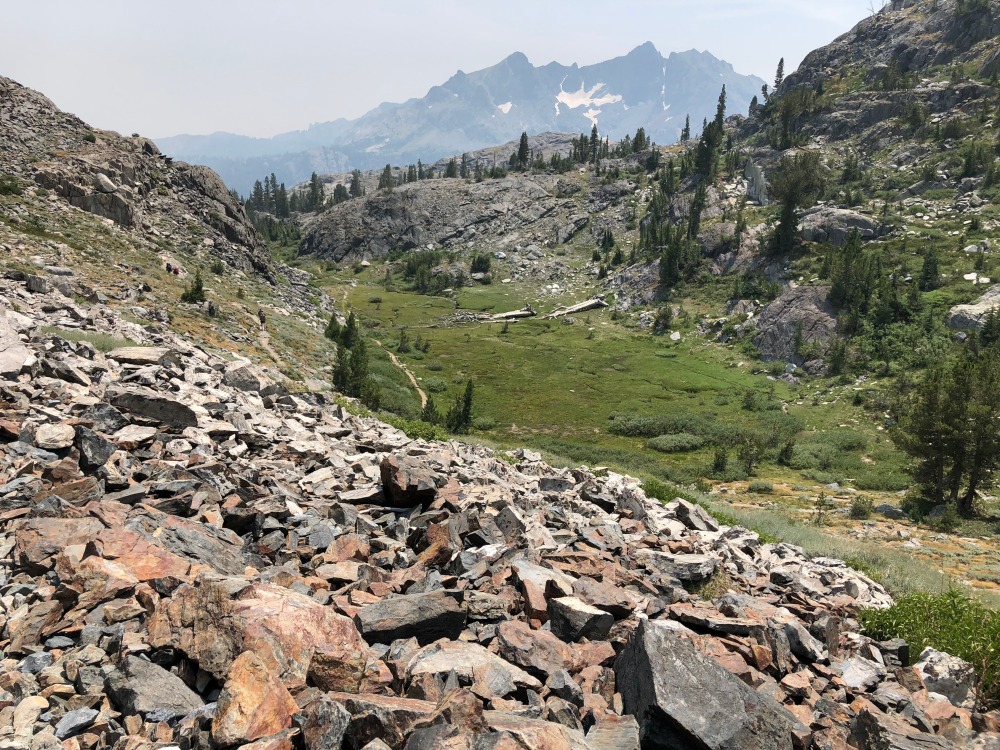 I was so focused on my thoughts and had just kept walking for a while when all of a sudden I realized something didn’t feel right. I pulled out my map and realized that I had taken a wrong turn somewhere and about half a mile back, the PCT had split from the JMT and I was on the PCT heading towards Agnew Meadows! This wasn’t the worst thing, and there were a few trails that looped back to the JMT, but they would add another 1.5 miles, or I could just turn around and go back, only adding about a mile (the .5 that I had already done then .5 back to the trail where I had made the wrong turn). I decided to do that and started getting mad at myself for not paying attention to where I was going, and not to mention wasting time and energy because of it.

There was a footbridge somewhere near 1000 Island Lakes and I stopped to take a picture. There were two hikers sitting near the footbridge, a girl a little older than me refilling her water in the stream and an older man sitting in the shade. The man asked if I wanted him to take a picture of me crossing the footbridge and I didn’t really care because I was still in a bad mood, but he seemed like he wanted to so I gave him my phone and let him take some pictures. They actually turned out really cute and I was happy that I had obliged. The girl came back from the creek and asked her dad what he was doing. He laughed and told her that he was taking pictures of me so that I would have more than just selfies. I thanked him, took back my phone and crossed the bridge again for real. It made me feel better about going the extra mile and wasting 40 minutes. It wasn’t really a waste though, I saw some really pretty views that I wouldn’t have seen if I didn’t turn down the wrong trail. I also wouldn’t have gotten those fun pictures. Hidden blessings I guess. Still, I had added time and miles to my day.

I made it to Garnet Lake a lot faster than I thought, despite the ‘detour’ and found a nice rock to spread out in the sun. I charged up my devices and dried out my sweaty socks and my underwear (I had sneezed on a busy part of the trail with a full bladder…yikes….I do not recommend it. I also learned to stop for bathroom breaks more often, whoops) I made a tuna wrap and discovered that I still had a small bag of Cheezits at the bottom of my bear can. SCORE! I ate my Cheezits and even added some into one of my tuna wraps. 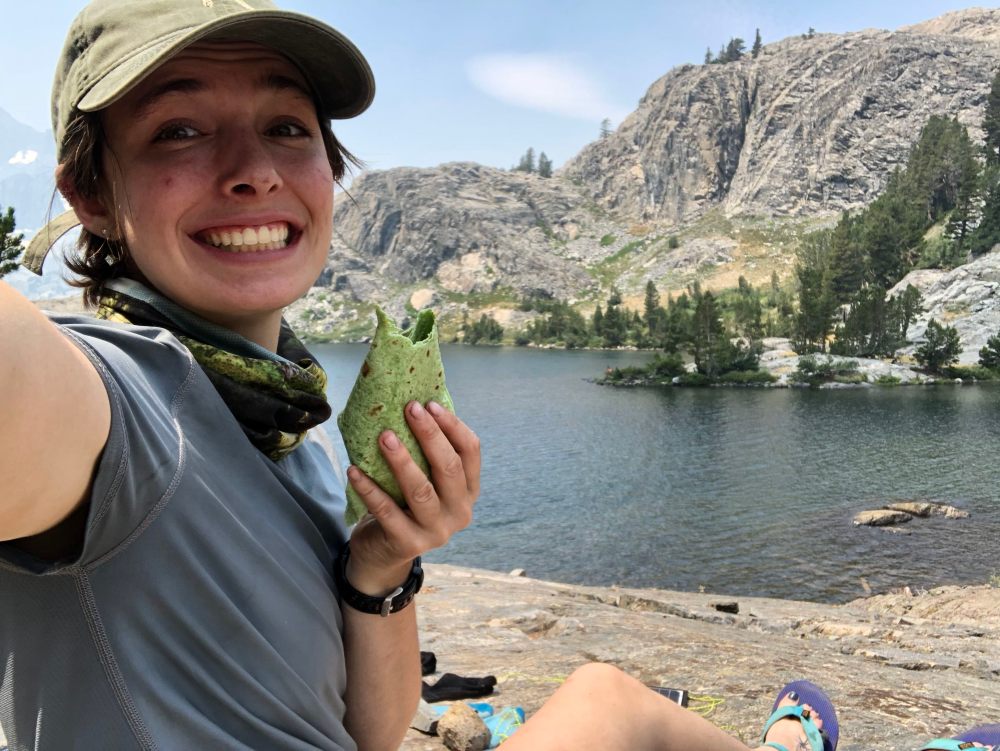 As I sat on the rock, I watched a group of four across the bridge. Two men and two women, all middle-aged looking. One of the guys went down to the river coming out of the lake and found a little pool to sit and soak in. He had been there for about 10 minutes when his friend snuck up on the ridge above him with a water bottle. He slowly started dripping water on his friend with more and more intensity until he splashed the rest of the bottle on him and ran away. It was like they were a couple of little kids playing. I laughed along with them and was hit with a pang of jealousy because I didn’t have anyone to laugh with.

I knew that I would probably feel lonely during parts of this trail, but I didn’t realize how hard it would hit. As I packed up and continued on the trail, I thought of my friends and family that I missed and hoped I could find some people on the trail to share some laughs with. I realized that I was having a different trail experience than people who weren’t hiking solo, and that the trail would still be here for me if I wanted to come back with friends one day, and that for now, I should just focus on the good things about hiking solo. I came up with a list, which I wrote out in my journal.

After brainstorming and making my list I felt pretty good. I kept moving forward and talked to a few people as I passed them. There were two guys I talked to that asked if the trail they were on was the one that headed to Garnet Lake. I told them that it was and they thanked me and said that they didn’t bring a map. That wasn’t the first time I had heard something like that on this trail. It surprises me how unprepared some people can be, especially for a trip like this! 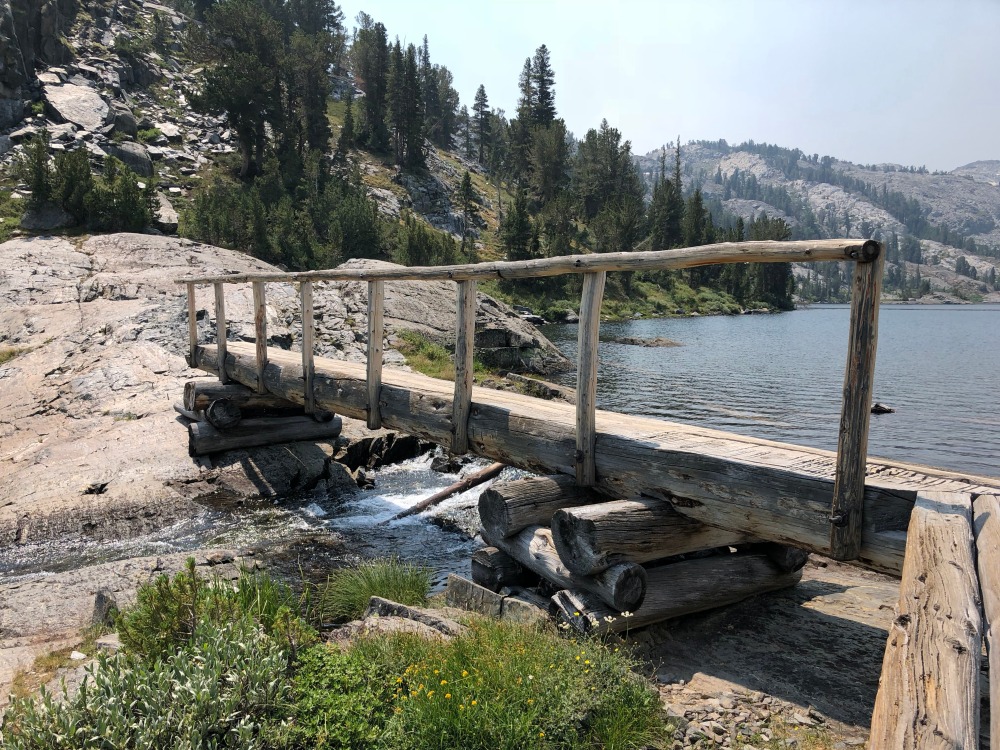 In the late afternoon, I came to shadow lake and started on a long set of uphill switchbacks. They dragged on and on and I started to wonder if I had actually somehow died and gone to some kind of endless switchback purgatory. I thought “hey, at least I’ll have killer calves after walking up switchbacks for however long I’m stuck in purgatory for!” It’s good to look for silver linings.

Eventually, I came to the end of my purgatory and ended up at Rosalie Lake. My grandma’s name is Rosalie so this lake had jumped out to me and I really wanted to camp there! I walked around the edge of the lake, looking for an open campsite. It was full of people, hanging out, fishing, and sitting around campfires and there were no open spots. I continued on up another hill. As I started to climb above the lake, I noticed a clearing that looked like it could be a campsite but upon further inspection, there was already someone camped there in a hammock. The person was lounging beneath the tree that held his hammock and he waved to me when he saw me looking. I waved back and then kept on hiking up the hill.

Eventually, I came across another lake, this one was much smaller and a lot more mosquito-ey. The water was still and did not look super drinkable. I was glad I had recently filled up and did not need more. I set up camp and used my camera’s timer to take some really dorky photos of myself posing by my tent. Before long, two other women, who I had been leap-frogging all day but hadn’t had the chance to talk to yet came by and asked me if this was the closest water source and if I thought it was safe to drink from. They had a filter but I said I personally wouldn’t trust it without filtering it but it should be fine if they filtered it. They filled up their water and asked if they could set up camp near me and I said sure, but they eventually decided to keep going a little further to see if they could find better water. I wished them good luck and made some dinner. 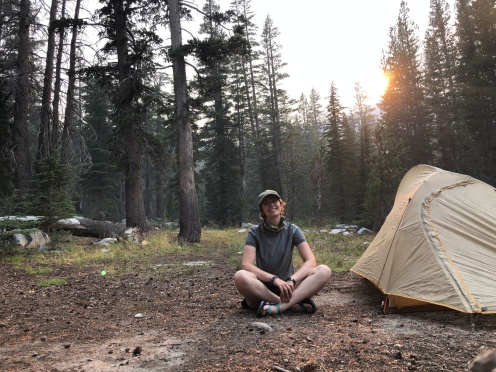 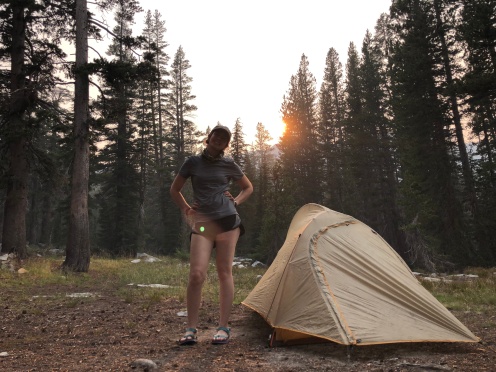 I had Spanish rice and tuna again and made sure to take out the super spicy peppers this time, I didn’t feel like burning my mouth. I realized that at this point, I was about a quarter of the way into the trail! I ate my dinner on top of a big rock overlooking the small lake and started dreaming about Red’s Meadow, which I would be reaching tomorrow morning. 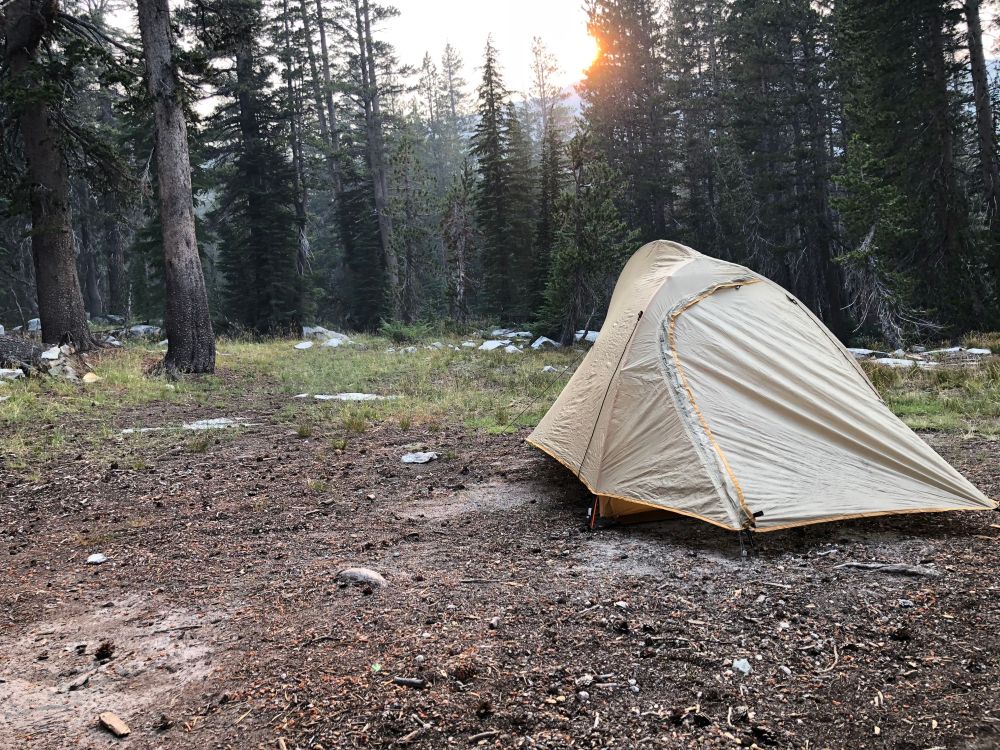 Thanks for reading, I’ll see you tomorrow! 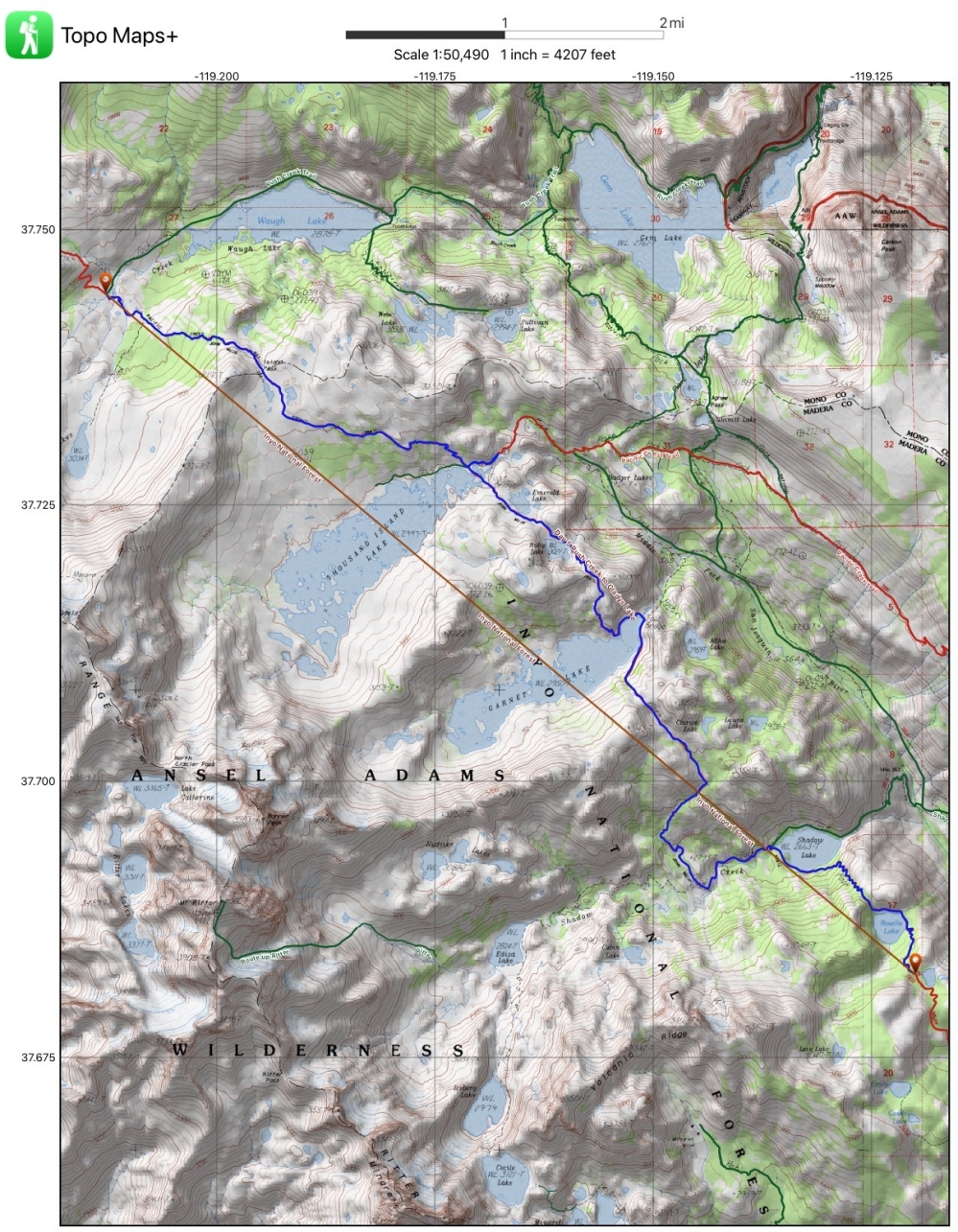 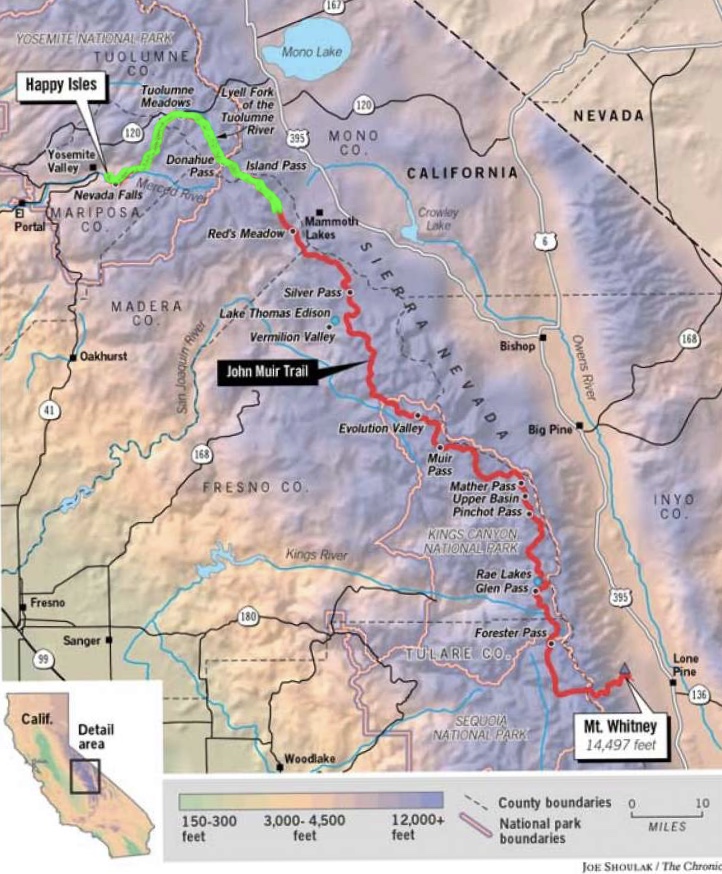